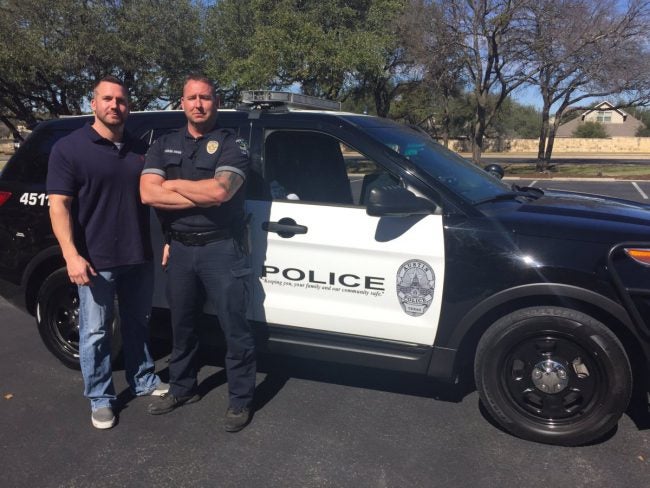 AUSTIN (KXAN) – When two Austin police officers noticed a teen stranded and broken down on the side of the road, they did what they say any officer would do – they pulled over to help. It’s what the pair did next that has people talking and giving.

On Feb. 7, the two got a call of a potential crash on the southbound flyover of MoPac and 183. Borne was the first to show up and realized it was no crash, but a teen with a blown-out tire.

Officer Sawin showed up and, together, the two taught him how to change a spare tire.

“Jason started showing him all the points in the car to put the jack, I started explaining to him lefty loosey, righty-tighty to take off the rim. Well as he’s doing that, I look at the tire on top of the hood, I notice it’s after market 14-inch tire,” Sawin said.

The problem is, the young man’s car didn’t use 14 inch tires. Then officer Sawin noticed something else. “I walked around and noticed the drivers side tire had a huge bubble and wires going everywhere,” Sawin said.

“It was only a matter of time before it exploded too, and he’s driving down a highway. It’s not safe for him or anyone else on the highway,”  Borne said.

The officers towed the car and without a second thought, the two split the bill for brand new tires.

“You could just tell by the look in his face, look in his eyes, what we were doing for him, he really appreciated it,” Sawin said.

Borne and Sawin are now raising money to either fix-up the car or buy him a new one through a GoFundMe account. People have already donated over $3,000. The goal now is to get him something reliable before he heads to college.

“He’s about to graduate and be hours away from home and we don’t want him being stranded somewhere else or in between there and home and not having any options,” Borne said.

It’s a story of two officers reminding us to look out for others who’ve hit a bump in the road.

“We’ve all been there, we could all use a helping hand once in a while and obviously this kid needed a helping hand for his tires. For his safety,” Sawin said.