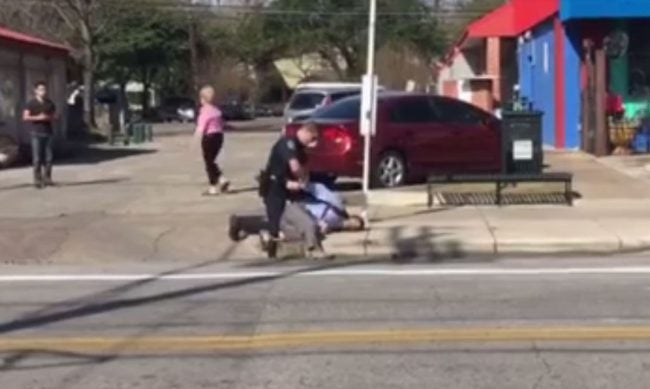 AUSTIN (KXAN) – A video posted on Facebook showing the arrest of a University of Texas at Austin associate professor in the Hyde Park neighborhood is making the rounds on social media, forcing the Austin Police Department to respond.

On Tuesday, a woman who was working at a business located at the corner of 42nd Street and Duval Street recorded video of an incident that was happening across the street from her at a bus stop. Witnesses at the scene posted on Facebook stating a man, 35-year-old Nedialko Dimitrov, who teaches in UT’s Cockrell School of Engineering, was waiting for the bus and acting “unstable.”

“From my perspective the young man had behavior issues – had some sort of imbalance,” Victoria Watson, the woman who posted the video said.

A person called 911 reporting a suspicious person who was yelling and making gestures at people passing by. When a police officer arrived, the video shows the officer standing a few feet away from the man for a couple of minutes.

“The young man pulled his headphones out and put them back in and was not responsive to the officer. From my perspective, it appeared as if he didn’t understand,” Watson says.

“I think that the officer was wrong by prohibiting him from getting on the bus,” Watson says.

The situation escalates and the suspect is brought to the ground at the 4:30 mark – while it’s not on camera, the person who filmed the situation said the man was shocked with the stun gun before he fell to the ground. While on the ground, the man can be heard asking “Am I under arrest?” several times.

While being detained, several witnesses were yelling at the officer telling him to stop tasering the man. Watson and other witnesses say they want to know why an officer used a stun gun on the man, who they call “harmless” and unarmed.

“I’m really disturbed and I really would appreciate if we as citizens aren’t treated this way,” Watson says.

Dimitrov was booked into the Travis County Jail on charges of public intoxication, evading detention and resisting arrest. He was taken to a hospital, but police said he refused treatment.

The Austin Police Department says they are aware of the video. “As is standard protocol, the chain of command will review the report and all videos to determine if any policy violations occurred,” said the department in a statement.

With nearly 500 shares of the video and dozens of comments, many are wondering what led to the officer using the stun gun on the man. Jerry Staton, a retired Austin police officer of 25 years sat down and looked at the video Watson took.

“As an officer, you’re more cautious because people are exhibiting behaviors that are not normal, are capable of abnormal reactions,” Staton says. He explains the officer seems to be following training at the beginning of the video as he stands back and assesses the situation.

“He is being patient or appears to be by not closing the space,” Staton said.

In the video, when the man approaches the bus, Staton says Dimitrov’s actions could be perceived as hostile.

“When you encounter someone, you don’t know who that person is, you do know that the number of officers being assaulted and killed and attacked and even ambushed has risen dramatically, so you know cops out there he has a tough job,” Staton says.

The former officer admits he believes the number of patrol cars that arrived on scene may have been excessive, but warns he doesn’t know the full details of the investigation and what may have prompted more patrol.

“The bottom line is you want to get this resolved quickly and peacefully, it’s just easier if two officers go ahead and take control, get him where they need him, get them in the car, get him out of there. The longer you’re there, the longer the potential for someone to do something silly,” Staton said.