Texas woman rescued by firefighters after getting hand stuck in toilet 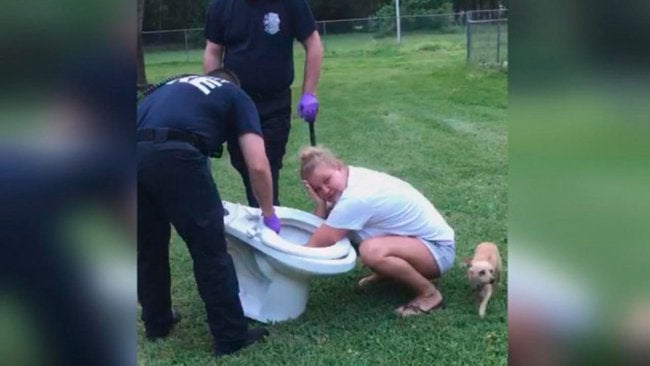 NEW CANEY, TX (InsideEdition.com) – Medics were recently called to a Texas home where a woman got her hand stuck in a toilet, and couldn’t get it out, and her embarrassing ordeal was caught on camera.

Gracie Henderson, of New Caney, found herself in the predicament last week after she reached into the toilet with the hope of fixing a clog.

“I thought maybe I’d grab it, and problem solved,” she told Inside Edition. “But I didn’t find it, and [my hand] got stuck.”

She thought she could handle the matter herself, without the aid of a plumber – but she was wrong.

“Nobody was here, nobody would ever know,” she thought to herself. “If I find it, pull it out and wash my hands.”

But her watch got caught in the pipe when she stuck her hand in. She was extra embarrassed because she’s a medic herself, and knew how it would sound from a first responder’s standpoint.

“It’s not really stuck, I’m not really about to call 911 for this. We’ve done all kinds of crazy stuff [as medics], but I have never done a hand stuck in the toilet call,” she quipped.

When the local fire department arrived, they had to knock the toilet out of the floor and carry it out to the yard, with Henderson still stuck to it. From there, they used a sledgehammer to free her.

“We told her to shut her eyes and look away,” firefighter Randy Sustaita told Inside Edition. “I knew [the toilet] was going to break fairly easily.”