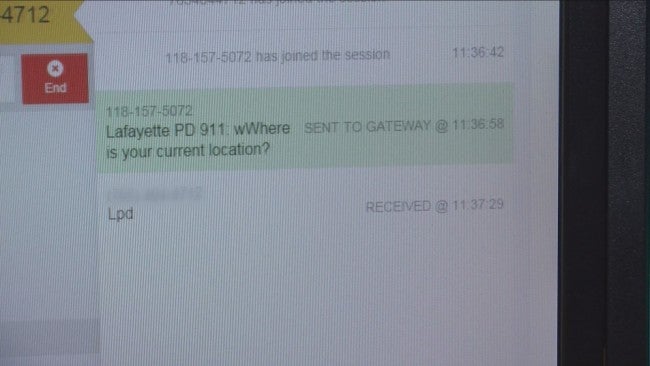 LAFAYETTE, Ind. (WLFI) – Sending a text message is nothing new to most people, but texting to 911 in Tippecanoe County is a concept that’s only been up and running for about six months.

“Everyone does it now, so it’s not that much different for them,” Tippecanoe County Sheriff’s Maj. Charlie Williams said. “There really wasn’t much of a training component. They receive a text on the thing and they text back.”

Williams said county dispatchers have only used the new system a few times.

“There’s obviously situations where it would be advantageous to text. But so far in 2015, we’ve had three,” Williams said.

Lafayette 911 supervisor Michael Franklin said there are three main situations where people could text their emergency to 911 rather than call. Those situations are if there is a language barrier, if the person is hard of hearing, or if the person can’t speak aloud due to a particular situation.

“They can text us if they are in a situation where they fear that if someone were to hear them telling us what the reason is that they are putting their life in more jeopardy,” Franklin said.

But in Lafayette the texts just aren’t coming in, they are going out too.

Franklin said so far this year, there have been more than 2,000 calls classified as hang ups or unknown emergencies. He said sometimes the dispatcher will text the number back if they suspect it’s a pocket dial. That accounts for the majority of outgoing messages, but Franklin said a few of those outgoing messages have saved lives.

“We’ve had two or three situations where people have been despondent or suicidal and have refused to answer the phone when it’s been called, but they have answered our emergency texts and we were able to locate those people,” Franklin said.

While a life-threatening situation has not come in through a text message in Lafayette, Franklin said the system is proving extremely valuable to the community.

“But I feel on our end going out, that we’ve used it for several life-threatening emergencies. It’s been very successful so far,” Franklin said.

Police said if you can call 911 that is still the best way to report an emergency because dispatchers will probably have several questions for you so that they can get you the help you need.