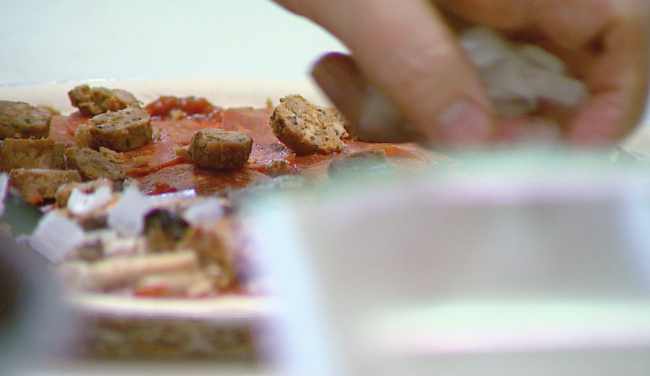 There are a number of reasons why people are excited for Sunday. “The commercials are enjoyable to watch, and they’re fairly entertaining, but I also like football,” Noblesville resident, Jesse Weager said.

For local restaurants, including Brother Doug’s Pizza Cafe, excitement is over the extra business. The National Retail Federation said will spend $82.19 this year on the game, which is the highest amount ever.

This is part of the reason why Brother Doug’s Pizza Café, which is always closed Sunday, will be open.

“For my customers I want to be there because they want pizza on that special day, and it’s also, kind of for me, fun because this is a special event where my family comes in and works,” Brother Doug’s Pizza Café owner, Doug Jeschke said. “My wife, and my young boys come in and we get to do that together.”

In addition to opening Sunday, the shop is offering football deals. “No matter if you’re rooting for the Falcons, or against the Patriots, we still want you to have a good pizza,” Brother Doug’s Pizza Café owner Doug Jeschke said.

But Hamilton County sheriff deputies know it’s not only pizza, people are enjoying. “We want everyone to have a good time, obviously, enjoy the football game, and may the best team win, but certainly, we want folks to think about what they’re doing and think before they drink,” Sheriff Mark Bowen said.

Of those, 30 were alcohol related. This is why on Sunday, departments from across Hamilton County will conduct more patrols.

Drinking and driving isn’t only a “Big Game” weekend problem. The sheriff’s office said its deputies arrested nearly a person a day last year for driving under the influence.

“It’s a big number, obviously, when you have over 300 alcohol arrests throughout the year,” Sheriff Mark Bowen said. “That tells us that people are still actively drinking and driving.”

A concern Sheriff Bowen said doesn’t just fall on the driver. If you’re hosting a big game party, make sure you do more than just place pizza orders.

“Make sure that as people are leaving that you look them over and make sure that they’re safe to be driving,” Sheriff Bowen said. “If not, be responsible, and call someone to come get them, or make arrangements to get them home.”

While there continue to be problems, the Sheriff’s office said things are getting better. The number of accidents dropped in 2016 from the year before during the “Big Game” weekend by 37 percent.