The greatest spectacle in kindergarten racing 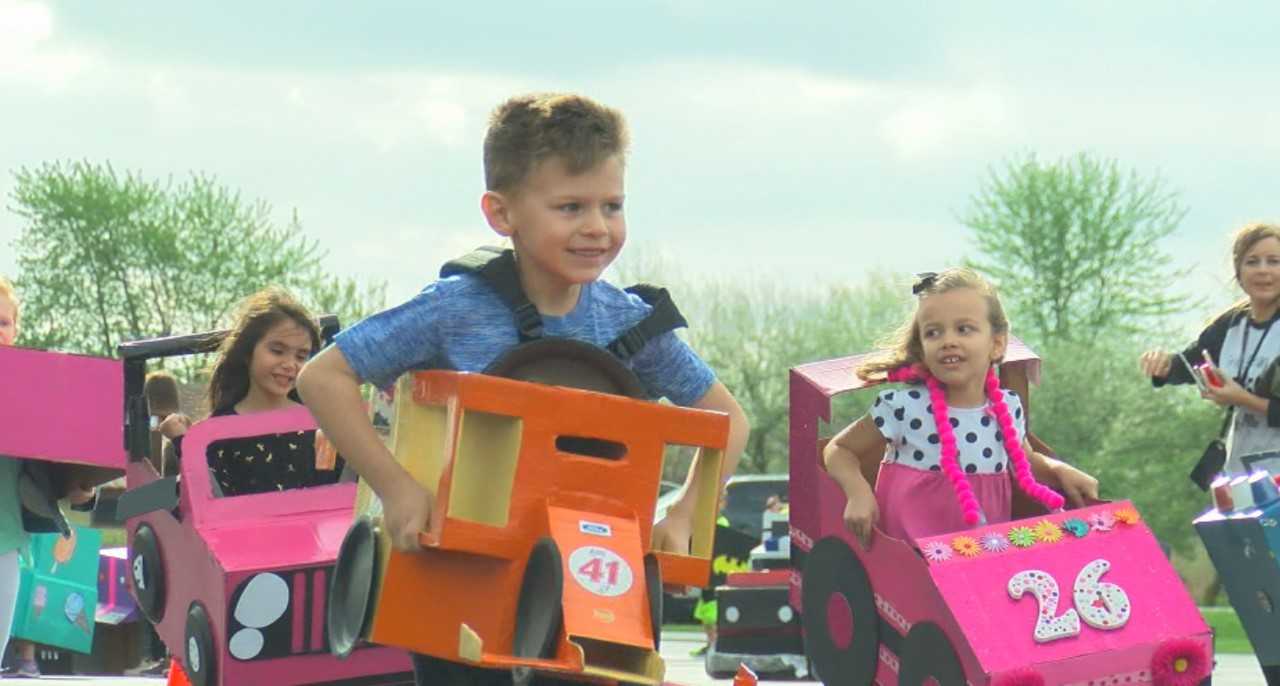 FORTVILLE, Ind. (WISH) — The Indianapolis 500 might still be weeks away, but the greatest spectacle in kindergarten racing is underway at Mt. Vernon Community Schools.

On Friday, 120 kindergartners and their families gathered in the Fortville Elementary School parking lot for the annual Kindy 500, where the 5- and 6-year-olds walk the track in homemade cardboard race cars.

“The kindergartners all make a box with their families. They start it in March,” said Courtney Munsell, a Fortville Elementary kindergarten teacher and organizer for the Kindy 500. “They get to decorate it. It’s free game. They get to make whatever they want.”

This year boasted a fair amount of firetrucks and police cruisers but also included a school bus, a Batmobile, a tank engine, a train and a shark.

“This is Pippa’s car,” said Ryla Stephenson, a kindergartner in this year’s race with her pink and white Pippa Mann-lookalike race car. “I added glittery paint and I added windows to it, and some wheels to it. But, they don’t roll.”

Kindergarten Jalini Stooker showed off his racing police car. “We made ‘Fortville’ right on this side. We put ‘Police’ on there and they know that’s a police.”

The kindergartners began the day with a car parade, then set up for slow-pace “races” around the parking lot. They were led by a cardboard box pace car and at the end met an Indy 500 princess with a checkered flag. All drivers picked up a medal and of course, a carton of milk, at the end.

“It was like a real race,” Ryla Stephenson said. “It was really awesome and it was really good.”

As in most races, there was a bit of drama. Munsell said kindergartner Adrien Cote got in a cardboard “crash” and had to be taken to the pit crew to be taped up.

“I ran so fast and I actually tripped over this foot and I crashed a part, and it looks different,” said Cote, referring to a bumped corner of his red and blue race car.

The is more than just a race. Teachers prepare their students well in advance, teaching them about their community, enabling visits from real pace cars and Indy 500 princesses.

The kindergartners also made their big debut in front of the rest of the elementary school, which Principal Stacy Muffler said is important.

“We line the hallways with all our first- through fifth-graders, all of our staff. They clap and cheer for them and I think they’re a little star-struck,” said Muffler.

The principal said the annual event has a larger purpose than just a fun recess.

“I think the purpose is a lot of family engagement. Having students really apply their creativity and different skills through the year can come out when they’re creating their cars and creating even the social dynamic of encouraging others during the race and being a good team player,” Muffler said.

Mt. Vernon Community Schools has its Kindy 500s every year. Their next event for McCordsville Elementary School kindergartners will be the week before the race. They said former radio “Voice of the 500” Paul Page is expected to attend and call the race.