The Latest: Finnish defenseman gets carried off Olympic ice 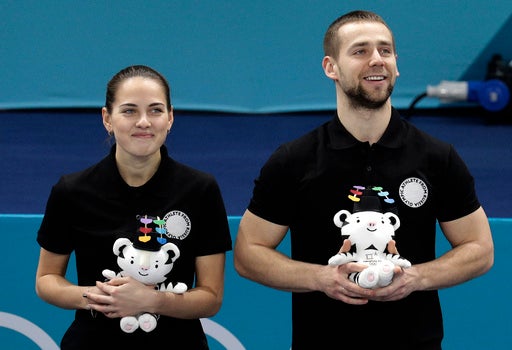 PYEONGCHANG, South Korea (AP) The Latest on the Pyeongchang Olympics (all times local):

Finland defenseman Ronja Savolainen went face-first into the boards and had to be carried off the ice during the women’s hockey semifinal against the United States at the Pyeongchang Olympics.

Savolainen got her legs tangled with American captain Meghan Duggan inside the Finnish zone midway through the first period Monday and went hard into the boards. She crumpled to the ice, while teammates surrounded her and the training staff rushed to her aid.

After a few minutes, two people helped her off, with her arm around their shoulders and her legs dangling between them.

There was no immediate announcement about her condition.

Duggan was not penalized, drawing a jeer from the Finnish fans in the crowd.

The heavily favored Americans were up 2-0 at the beginning of the second period.

Tessa Virtue and Scott Moir lead the ice dance competition at the Pyeongchang Olympics after a record-breaking short program set to the rock music of the Rolling Stones, the Eagles and Santana.

The Canadian duo scored 83.67 points to lead their training partners and biggest rivals, Gabriella Papadakis and Guillaume Cizeron, by more than a point heading into Tuesday’s free dance.

The French couple scored 81.93 points for their Latin short program.

Madison Hubbell and Zachary Donohue of the U.S. are third, two-hundredths of a point ahead of their compatriots, Alex and Maia Shibutani. Fellow Americans Madison Chock and Evan Bates are seventh.

Russian curlers say a coach on their team has told them that mixed doubles bronze medalist Alexander Krushelnitsky tested positive for a banned substance at the Pyeongchang Olympics.

She adds the team wanted to comfort Krushelnitsky and his wife and curling partner Anastasia Bryzgalova but ”we thought that there are no words to comfort now. We just tried to stay away.”

Russian Curling Federation president Dmitry Svishchev would not confirm the athlete’s name. Svishchev said it was possible that an athlete’s food or drink had been spiked with a banned substance.

International Olympic Committee spokesman Mark Adams says a failed doping test by a Russian athlete could keep the country’s banned team from being reinstated and marching under the national flag at the closing ceremony.

Krushelnitsky, whose event is over, was not with the team at the arena Monday.

Another eight cases of norovirus have been confirmed at the Pyeongchang Olympics, bringing the total to 283. Of those, 49 are still quarantined and the rest have recovered and been cleared to resume their normal routines.

Among the more recently diagnosed is U.S. hockey defenseman James Wisniewski’s father. Wisniewski says his dad, Jim, who is 62, began feeling the effects of norovirus Saturday and is in quarantine.

Officials have recommended players fist-bump each other rather than shaking hands because norovirus is so contagious.

At the beginning of the games, thousands of security workers were kept in their rooms because of norovirus concerns at a youth training center where they were staying

Two-time Olympic medalists Tessa Virtue and Scott Moir have broken their own record for an ice dance short program with a score of 83.67 points at Gangneung Ice Arena.

The Canadians, who won Olympic gold in Vancouver and silver in Sochi, received level-four marks on all five elements in their program. That included a dazzling midline step sequence to open the program and a rhumba sequence on which they were graded harshly during the team event.

Canada’s women curlers are fighting their way back from a shocking string of losses at the Pyeongchang Olympics.

The Canadians nabbed an 8-3 win over Japan on Monday in the women’s round robin. Japan conceded the game early after a strong performance from the Canadians left them with little chance of catching up.

Canada’s women curlers are the defending world champions and came into the games as the favorite to win gold. But they fell to last place in the standings after losing their first three games. Monday’s game marks their third straight win, putting them fourth place in the rankings.

Korea and Sweden are now tied for first place in the women’s rankings, followed by Japan.

Two Americans who are representing South Korea in the Pyeongchang Olympics have made the cut for the free dance competition.

Min bawled when she saw the short dance numbers from the judges.

She says, ”All we could ask for was to put out our best performance, and we did. It’s the most amazing feeling.”

Min had a wardrobe malfunction during the team short dance, with a hook popping at the beginning of the routine. She fought through, keeping the costume up for the entire program despite having thoughts of stopping.

No such worries this time, and she’s thrilled to be remembered for something else at these Olympics.

The women’s hockey tournament will increase from eight to 10 teams for the 2022 Olympics in Beijing.

The move will help allow China to have a team in the tournament.

Federation council chairwoman Zsuzsanna Kolbenheyer says the quality of women’s hockey around the world is good enough for this step, pointing to Japan beating Sweden on Sunday and no team scoring more than eight goals in a game as signs of progress.

Gangneung Ice Center has been pretty much filled for most of figure skating, one of the premier events of the Winter Olympics.

Not Monday morning (Sunday evening U.S. time), though. The building that has a capacity of about 12,000 was half-empty when the short dance began. There were sections near mid-ice and also in the end zones that were practically unoccupied.

For most other figure skating events at these games, the arena filled up quickly. But it never had so few people in it for the beginning of a competition.

The top ice dance couples are not scheduled to perform until deep into the 24-duo short dance.

Ice dancing is underway at the Olympic Games with two-time medalists Tessa Virtue and Scott Moir of Canada and France’s Gabriella Papadakis and Guillaume Cizeron the heavy favorites to win gold.

Three American couples have a chance at landing on the podium.

Maia and Alex Shibutani, the siblings who helped the U.S. win team bronze, are making their second Olympic appearance. They’re joined by Madison Hubbell and Zachary Donohue, the reigning national champs, and Madison Chock and Evan Bates, the latter of whom is competing in his third Olympics.

The short dance is Monday South Korea time (to be broadcast Sunday night in the U.S.) with the free dance wrapping up the competition Tuesday.

A strong performance from Tessa Virtue and Scott Moir helped Canada win gold in the team competition, but Gabriella Papadakis and Guillaume Cizeron of France and American siblings Maia and Alex Shibutani could provide serious competition.