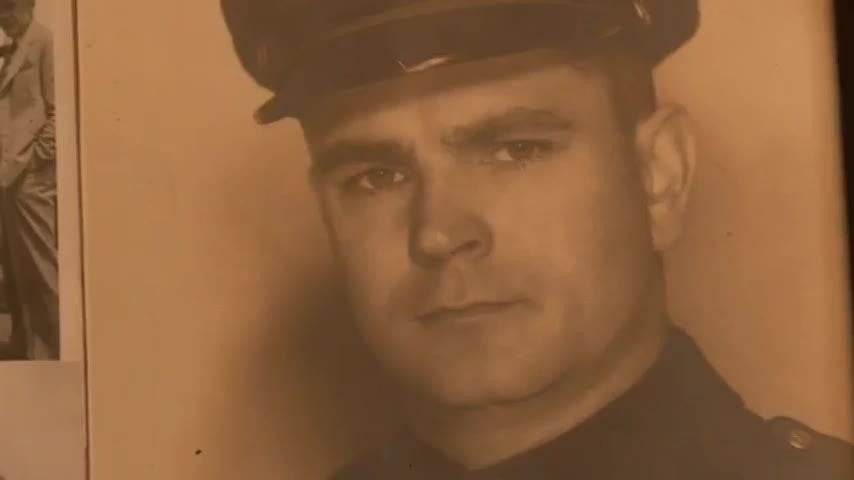 LAFAYETTE, Ind. (WLFI) — A couple of sentences isn’t enough to truly honor a state trooper killed in the line of duty. That’s why David Morrison spent nearly half his life learning about what really happened to Trooper Paul Minneman in 1937.

He wrote it all down for Minneman’s family but found out others are interested, too.

David Morrison never set out to be an author.

“I’m not a writer or a speller,” Morrison said.

He’s a former Indiana State Police trooper. His interest in Minneman’s story started 43 years ago when he was ordered to present the flag at Minneman’s reburial in Lafayette.

“I didn’t really know who he was,” Morrison said.

When Minneman was killed in 1937, he and his wife, Margaret, were expecting a baby girl. Margaret named their daughter Paulene. Morrison met Paulene and her daughter at the reburial ceremony.

“And I kind of forgot about it,” Morrison said.

That is, until he ran into Minneman’s granddaughter a second time, years later.

“Came up and asked if I knew her grandfather, Paul Minneman,” said Morrison. “And it just hit me like a brick for some reason. I said, yes, we read his name off every Memorial Day.”

After talking with her and reuniting with Paulene, Morrison said he felt called to find answers for Minneman’s family. They didn’t know much about how he died.

“Flat tires everywhere, bullet holes,” said Morrison as he showed a photo of the state trooper car Minneman was driving the day he was killed.

Minneman died trying to stop the infamous Brady Gang after they robbed the Goodland State Bank.

When Minneman had them cornered at Caley Church in White County, he was riddled with bullets. Neighbors said it sounded like thunder.

“At the very end, the last word from his mouth was ‘Margaret,'” Morrison said.

That’s the part that stuck with Morrison. It reminded him of his own marriage and the way his wife would flicker the lights three times as he left for work each day. It symbolized the three words, “I love you.”

“You know, I’d wave back and flicker my lights,” Morrison said. “But, it didn’t dawn on me until I retired, just how fortunate I was. And I kind of think Margaret was always blinking the light for the trooper, like he might not come home again.”

Morrison said he imagined what that would feel like. What it would do to Minneman’s namesake daughter who never got to meet him or know about the sacrifice he made.

“My whole purpose was to let Paulene know about the phenomenal father she didn’t get to meet,” Morrison said. “But, he can live on.”

His story can live on because of the decades Morrison spent digging up and documenting it. Morrison’s book was accidentally deleted twice, but he kept on.

“What a struggle, but I just had to tell it for the daughter,” Morrison said.

If you would like to learn more about the book or obtain a copy, email davmar6611@centurylink.net.