Thief caught on camera stealing copper from SE side business 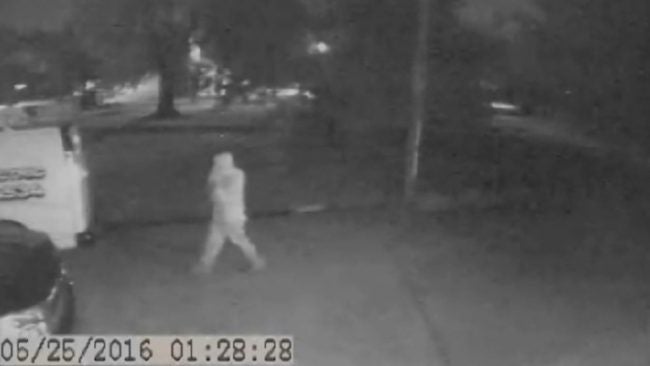 INDIANAPOLIS (WISH) — Police are investigating after a thief was caught on camera stealing copper from a business on the southeast side of Indianapolis.

The business owner told 24-Hour News 8 he woke up Wednesday morning to find his gate wide open and a trash can sitting at the end of the driveway.

Pawel Kopec, owner of Kopec Electric, said it wasn’t there before, so he checked his cameras and saw someone snooping around his property.

Surveillance cameras captured the thief walking up to the driveway of the business just before 1:30 a.m.

“They didn’t drive a car in here, nothing that made a lot of noise, kind of walked in really quiet,” said Kopec.

The thief is covered from head to toe, wearing a hoodie and a scarf. Kopec said he couldn’t really tell if the thief seen carrying a duffel bag is a man or a woman.

Video shows the thief opening up the gate to the back yard.

“Someone had came here and went through the barrel of wires and found the bare bright strip copper and picked up the barrel and carried it out to the driveway and put it in a duffel bag, I imagine, and walked off,” Kopec said.

But the thief didn’t get very far, leaving the barrel behind.

“I probably would have came out and ran him off, you know and just yelled at him. I mean that’s all I would have done,” Kopec said.

Kopec has been in business for several years. He said the video was upsetting to watch.

“There’s nothing you could really do about it, I mean we have cameras,” he said. “I would think that would be enough deterrent but obviously it wasn’t.”

Kopec is now warning other business owners in the area about the theft knowing very well the person responsible could come back for more.

“I mean whoever it was, they’ve done this before and they’ll probably do it again somewhere,” Kopec said.

Kopec told 24-Hour News 8 he has since installed extra cameras on his property. He believes the thief got away with $50 worth of copper.

If you know anything about this case, you’re asked to call police.