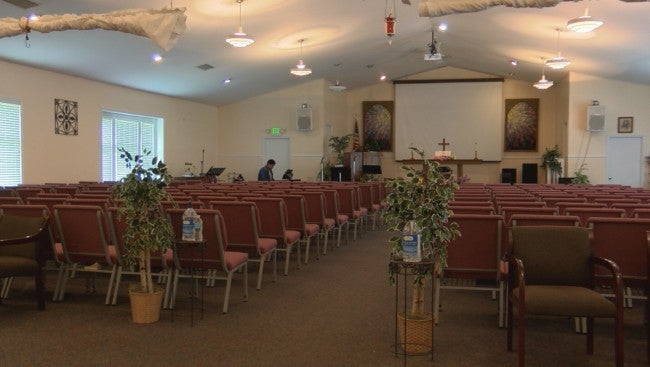 INDIANAPOLIS (WISH) — A church on the west side of Indianapolis is looking to replace some equipment after police say thieves broke into the place of worship.

It happened in the 3000 block of West 62nd Street last week.

Pastor Martin Martinez has been preaching at the Jesus Christ is Life Church for many years and never had a problem until now. He tells 24-News 8 that someone broke in through a window last week and got away with thousands of dollars’ worth of musical instruments.

Band members are praying to get everything back in one piece.

It’s in the sanctuary of the church shared with another congregation where Martin Martinez, Jr. said he finds comfort.

The son of the pastor has a passion for music. He records and produce on his own time. He also plays keyboard for the church band at least four times a week.

But right before service last Friday, band members knew that something wasn’t right.

“I was coming to church and I see the band members coming towards me and they asked me, ‘do you have the equipment?’ and I was like, ‘no, why?” and they told me that it was missing,” said Martinez, Jr.

Band members searched in every room, but found nothing. Pastor Martinez soon realized that someone had made their way in through a back window.

The pastor said the thieves got away with a lot of expensive instruments, including two keyboards, three bass, two guitars, and a bunch of cables.

“You’re working so hard to get your stuff, the people working and bringing some money to get good stuff,” said Pastor Martinez. “Then one day everything is missing.”

The pastor said he has already filed a police report. Band members are now praying for a miracle. They’re hoping to get everything back in time for their next service.

“I was just disappointed and sad that somebody really needed to do this because you never know why people do what they do,” said Martinez Jr. “I didn’t judge him so quick, or her, whoever it was. I didn’t judge them. I just pray for them.”

Pastor Martinez told 24-Hour News 8 they were able to borrow some equipment from another congregation for service that day. They share the same space.

Martinez said they stopped by Guitar Center to replace some of the instruments only to find that one of their stolen keyboards was on display for sale.

The company says they are working with police on the investigation.