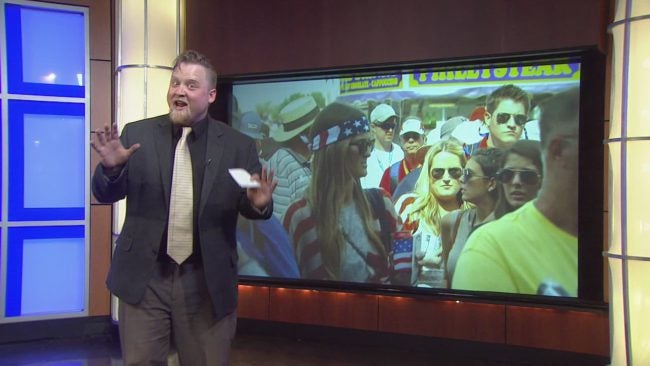 INDIANAPOLIS (WISH) – The search for this year’s Indy 500 poet is over.

Adam Henze won the contest and claimed the title of the Official Poet of the 100th Running of the Indianapolis 500. There are 33 other finalists. All of their poems are online.

He and Keira Amstutz, Indiana Humanities’ president stopped by WISH-TV8 to discuss the contest.

Here are some of the questions Keira answered:

Watch Adam read his poem in the video. The full text is below:

“This poem is for the track folk who just love the smell of Ethanol.

This is an anthem for the hearts that’ve surged at the scope of the Pagoda.

For the hands that know the feeling of slapping the North Vista tunnel ceiling.

For the lips that whisper along with Florence Henderson when she sings,

yes. This poem is for the 500 fans who love fast, loud things.

The hot dog chompers and buttermilk sippers, and

granddads with ledger pads in suede cases and locked zippers.

on top of a cooler and their fingers gripping the fence.

For the moms smeared with baby sunscreen changing diapers in the stands.

This poem is for the Brickyard pickers, marching band

This is for the pit crews, the announcers, the flyby pilots in the sky.

For the girl who’d never seen her dad cry until the day Dan Wheldon died.

This poem is for the Andy Griffith neighbors, the binocular

This poem is for every shoulder with a Memorial Day tattoo.

This is for the drivers willing to go bumper to bumper, for the flag

This is your poem Indianapolis, taking the turn with direct injection. Race fans,

thank you for being the sparks that start the engines.”