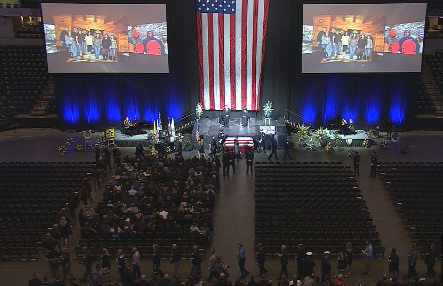 INDIANAPOLIS (WISH) — A day of events honoring slain Southport police Lt. Aaron Allan were held Saturday, beginning with a police procession accompanying him to where his public funeral took place.

Allan was an Indianapolis resident since the age of one and graduated from Decatur Central High School in 1997.

He enlisted in the United States Air Force in 1999 and was medically discharged after becoming ill.

He had been with the Southport Police Department for six years and spent a total of 17 years with law enforcement.

An estimated 2,000 people gathered at Bankers Life Fieldhouse to remember Allan’s life. Attendees included law enforcement members from all across the nation.

“Godspeed, Lt. Aaron Allan. You are irreplaceable, and you will be missed,” said McClure.

The Reba McEntire song “Back to God” was played during the service. The country music legend referenced the song being played.

I hope it helps and heals hearts the way it helped and healed my heart. My thoughts and prayers go out to friends and family.- Reba (@reba) August 5, 2017

Four of Allan’s friends from the Marion County Sheriff’s Office remembered Allan, calling him their “rock,” and saying he was “the best friend a man could ever want.”

Dozens of people gathered at the Southport Police Department to pay their final respects to Allan.

A smiling portrait of Allan was placed in front of the Southport Police Department.

Those lined up outside the police department tried to say what they could about a man who lost his life trying to save another.

“It’s tough, you feel guilty knowing that we’re there to tuck our kids in every night, and now his kids won’t have him to tuck them in,” said Kari Decker, who husband is a police officer.

These kiddos are all from Shelbyville. Their parents wanted to bring them to @SouthportPD to show their support pic.twitter.com/dloesISPVe– Brittany Lewis (@brittlewisnews) August 5, 2017

Once he arrived at his final resting place, Allan’s casket was transferred from the coach to the caisson. Bells tolled to signify the start of the funeral procession.

A riderless horse with boots reversed in stirrups traveled behind the caisson that took Allan into the cemetery.

Allan was buried in the Crown Hill Cemetery Heroes of Public Safety section.