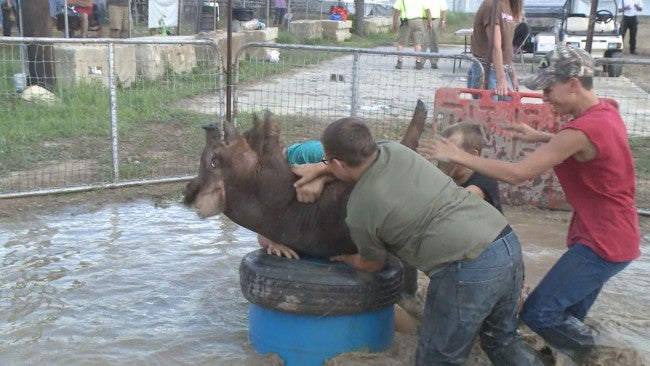 An online petition to cancel a pig wrestling tournament at the Whitley County Fair has received more than 5,000 signatures. But more than a thousand have signed a different petition supporting the event.

Kyle Bailey raises pigs in Noble County to be used in such tournaments. This year he will take them to Allen, Whitley, Noble, and two other county fairs.

Bailey, 39, said his events are more humane than other pig wrestling tournaments. Teams have to catch a 200 to 300 pound pig in a mud pit, pick it off the ground, and touch it to a padded barrel. If a team can do so (Bailey said it only happens about 15 percent of the time), a referee blows a horn and the pig is let go.

“Last year we did 523 teams and we didn’t have a single injury on any pig,” Bailey said.

When his pasture-raised pigs were butchered last year, he asked if they had any injuries.

“I really wanted to know if we had any bruising, muscle damage, any obvious signs of injury and we had zero on all 80 pigs,” he said.Previous Coverage: Deleware County cancels hog wrestling

An online petition against pig wrestling tells a different story. Among other things, it says pigs suffer during these events because of how they are pulled, twisted, and manipulated. It also says children who witness such cruelty are subject to psychological harm.

Bailey said at his events, contestants can’t flip the pigs over or grab their tails, ears, and mouth. But Newschannel 15 archive footage of the 2014 Allen County fair shows at least one team of four flipping a pig on its back and touching it to top of a barrel as it squealed. Bailey confirmed that these were his pigs and his event, but he wasn’t refereeing because of a prior arrangement.

“Being around livestock all my life, what we’re doing is simulating if we need to give one of the pigs a shot right now, that’s what we do. We either have to catch this pig and put it on a table to give it a shot or treat it or the other way you catch a pig is you use a cable snare which you would hook around their mouth, crank it tight, and then you’ve got a hold of that pig,” he said. “To me it’s more humane to grab that pig and pick it up.”

Pig wrestling is growing in popularity. Bailey said they raise between $8,000 to $12,000 for each fairground.

“We’re well aware of the comments that others have made and we respect their decision,” Bailey said. “But we just ask that people would respect the decision of the people who want to take part in the hog wrestling event.”