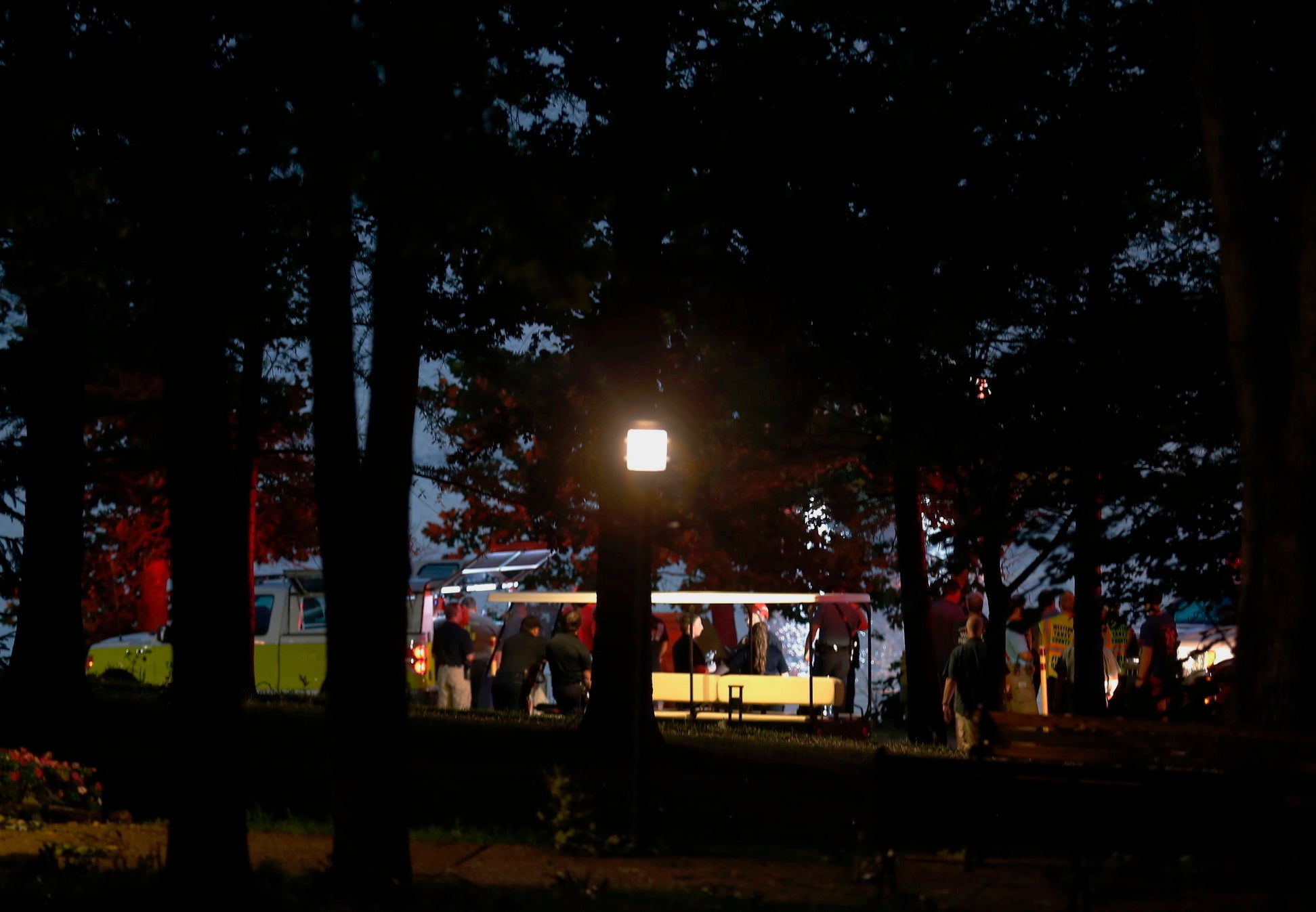 BRANSON, Mo. (AP/KOLR) — A Missouri woman says nine Indianapolis family members killed when a duck boat sank were put on the ill-fated boat because of a ticket mix-up.

The nine members of one family who died in the duck boat accident were from Indianapolis, said Thomas Griffith, suffragan bishop of Zion Tabernacle Apostolic Faith Church in Indianapolis. He did not identify them.

Missouri Gov. Mike Parson’s office confirmed that nine of the 17 victims in the accident were from one family and two other family members survived.

Tracy Beck, of Kansas City, says she and her family were waiting in line for another boat when the Indiana family stopped talking to have a group picture taken by the tour company.

Beck says the ticket taker realized the family should have boarded at a different location in Branson.

The family had to get new tickets and was put on the boat that eventually sank. Beck said she recognized the family when pictures began circulating Friday

Beck says the water became choppy while they were on the lake and the captain decided to return to shore.

But she says she doesn’t blame the operator of the doomed boat.

“I couldn’t see anybody; I couldn’t hear anything. I could hear screams. I just … it felt like I was out there on my own. And I was yelling, I was screaming, and finally I said, ‘Lord, just let me die, let me die. I said, ‘I can’t keep drowning, I just can’t keep drowning,’ and that’s how I felt. And then I just let go, and I started floating. And I was floating up to the top, I felt the water temperature raise to warm. And as I felt the water temperature raise, I jumped up and I saw the big boat that sits out there. I don’t know what kind of boat but it’s huge thought. And when I saw them, they were throwing out life jackets to people. And I said, ‘Jesus, just keep me. Keep me so I can get to my children. Keep me, Lord,'” Coleman said.

An Arkansas man and his son are also among the 17 people who died.

Carroll Smith said in a telephone interview Friday that his 53-year-old son, Steve, and 15-year-old grandson, Lance, were killed when a Ride the Ducks boat sank amid churning waters Thursday on Table Rock Lake. The family is from Osceola, Arkansas.

Steve Smith’s wife, Pamela, was with the family on the visit to Branson but did not go on the boat. Steve Smith’s 14-year-old daughter, Loren, suffered a concussion but survived.

Carroll Smith says his son was a retired math teacher who loved old Westerns and was active in his church. Lance would have been a freshman at Osceola High School.

About 300 people gathered in a parking lot outside a tourism business to remember the people who died in the duck boat accident.

The mourners Friday night sang Amazing Grace and prayed, some of them holding candles. Another 75 gathered at Brookside Church in Branson to pray.

The Ride the Ducks boat sank Thursday in Table Rock Lake in southwest Missouri after a strong storm generated wind gusts of 50 to 65 mph in the area. The Coast Guard and National Transportation Safety Board are investigating.

Divers found four more bodies Friday in a Missouri lake where a duck boat packed with tourists capsized and sank in high winds, bringing the death toll to 17 in the country-and-western town of Branson, authorities said.

Investigators blamed stormy weather for the accident Thursday evening on Table Rock Lake. Winds at the time were blowing as hard as 65 mph (105 kph), according to the National Weather Service.

Fourteen people survived, including seven who were injured when the boat went down, state police said.

Named for their ability to travel on land and in water, duck boats have been involved in other serious accidents in the past, including the deaths of more than 40 people since 1999.

Five college students were killed in 2015 in Seattle when a duck boat collided with a bus. Thirteen people died in 1999 when a boat sank near Hot Springs, Arkansas.

“Duck boats are death traps,” said Andrew Duffy, an attorney whose law firm Philadelphia law firm handled litigation related to two fatal duck boat accidents there. “They’re not fit for water or land because they are half car and half boat.”

Safety advocates have sought improvements and complained that too many agencies regulate the boats with varying safety requirements.

The boats were originally designed for the military, specifically to transport troops and supplies in World War II. They were later modified for use as sightseeing vehicles.

Passengers on a nearby boat described the chaos as the winds picked up and the water turned rough.

A severe thunderstorm warning had been issued for Branson at 6:32 p.m. Thursday, about 40 minutes before the boat tipped over.

Lester’s boyfriend, Trent Behr, said they saw a woman in the water and helped to pull her into the boat. He said he was about to start CPR when an EMT arrived and took over.

The driver of the Ride the Ducks boat died, but the captain survived, Stone County Sheriff Doug Rader said.

Divers located the vessel, which came to rest on its wheels on the lakebed, and authorities planned to recover it later Friday.

The boat sank in 40 feet (12 meters) of water and then rolled on its wheels into a deeper area with 80 feet (25 meters) of water. Investigators had no information about whether passengers were wearing life jackets or whether they were stowed onboard, the sheriff said.

The names of the dead were not immediately released.

A spokeswoman for Cox Medical Center Branson said four adults and three children arrived at the hospital shortly after the accident. Two adults were in critical condition, and the others were treated for minor injuries, Brandei Clifton said.

An off-duty deputy working security for the boat company helped rescue people after the boat turned over, the sheriff said. Dive teams from several law enforcement agencies assisted in the effort.

Suzanne Smagala with Ripley Entertainment, which owns Ride the Ducks in Branson, said the company was assisting authorities. She said this was the ride’s only accident in more than 40 years of operation.

Thirteen bodies had been recovered by early Friday morning.

In the hours after the accident, the lake was calm. But another round of thunderstorms passed within 10 miles (16 kilometers) of the area Friday morning, and more storms were forecast for later in the day, some severe, weather service meteorologist Jason Schaumann warned.

Weather can change rapidly in this part of the country, moving from sunshine and calm to dangerous storms within minutes, Schaumann said.

“Tornado warnings get a lot of publicity, and severe thunderstorm warnings should be taken very seriously too, particularly if you are in a vulnerable area like a lake or campground,” he said.

Investigators from the National Transportation Safety Board were expected to arrive on the scene later Friday morning.

President Donald Trump tweeted his condolences, extending his sympathies to the families and friends of those involved.

Branson, about 200 miles (320 kilometers) southeast of Kansas City, is a country-themed tourist mecca built on a reputation for patriotic and religious-themed shows in numerous theaters.

Table Rock Lake, east of Branson, was created in the late 1950s when the Corps of Army Engineers built a dam across the White River to provide hydroelectric power to the Ozarks.