Tips for safe riding as more people commute on bikes 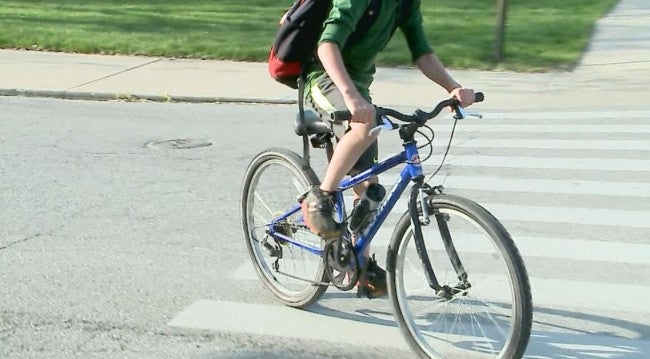 INDIANAPOLIS (WISH) — During the warm seasons, hundreds of people use their bikes to get to and from work.

Sometimes that means riding through the congested streets of downtown Indianapolis.

Cycling experts believe this is a good time of year to talk safety.

Robert Young rides his bike to work in downtown Indy every day.

He’s never been in an accident, but has friends who have been hit by cars.

“If you’re commuting you’re usually going in the morning or towards the evening when it might be low light,” Shipley said, “So you want to wear bright clothes and have front and rear blinking lights to help cars see you.”

And Young said cyclists should be aware of the rules of the road.

For example, he said cyclists are like vehicles and shouldn’t travel the wrong way on a one way street.

Young said he sees it all the time.

“Actually I saw a guy when I was coming to work today coming up Illinois and he was in the bike lane going south,” Young said. “It’s just an educational issue.”

And he feels it’s dangerous to ride a bike on the sidewalk.

“If you’re riding against the flow of traffic on a sidewalk then a car coming out of an alley is not looking in that direction,” he said.

Also, passing a slower cyclist on the road can be confusing for drivers.

Shipley asks drivers to wait until there is plenty of room.

“It would be the same as passing a slower car on a two lane road,” Shipley said, “If you have a passing zone and no oncoming traffic, you just pass a cyclist like a slower car.”

He also said distracted driving can be an issue.

“Cyclists should also make eye contact with the cars around them so you know who sees you, and you know who may be distracted, and who to watch out for,” Shipley said.

The organization Indy COG is a bicycle advocacy group.

They have a number of tips for safe riding on their website.

We Stand Together / 54 mins ago