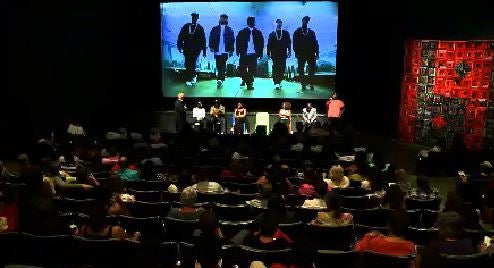 INDIANAPOLIS (WISH) – The conversation about fatal police shootings this week has made its way to Indianapolis.

It happened Thursday night at the Indianapolis Museum of Art. Museum directors said the community discussion was planned months ago, but after two incidents of black men shot by police this week across the country, organizers said the conversation is more important than ever.

This community event was organized by the ACLU of Indiana and the Indianapolis Museum of Art and focused around free speech, policing and racial justice.

After events this week there are topics that are weighing heavy on the minds and hearts of people Thursday night.

Thompson said, “I’m trying not to be emotional about it and think about it logically.”

Her goal for the meeting was for there to be more understanding between people of all races and backgrounds.

“Once you get understanding and a little empathy then we can open a discussion and actually have an honest discussion about what it going on.”

She said she knows there’s only so much that can be done in events like this, but she thinks this was an important first step.

“There’s tons of work to be done but it starts with everybody taking a breath and just trying to understand and learn from each other,” she said.

After the discussion, the group watched the movie Straight Outta Compton.

Museum leaders said they hope to have more events like this in the future.