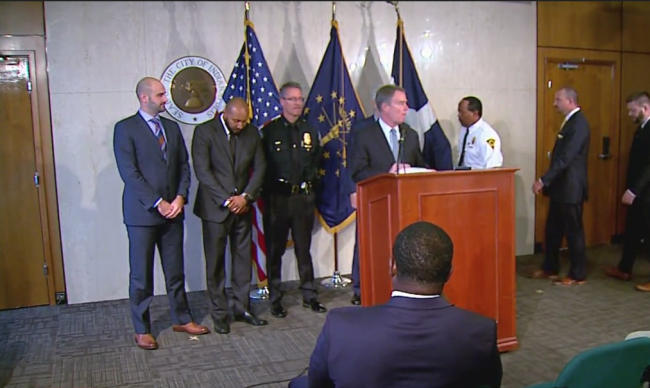 INDIANAPOLIS (WISH) – The city of Indianapolis on Thursday announced it will file a lawsuit against opioid manufacturers and distributors.

Mayor Joe Hogsett announced Thursday morning that the law firm of Cohen & Malad, LLP has been hired to pursue the legal action. Lead attorney Irwin Levin alleges the billion-dollar companies misled patients into thinking their pain medications were not addictive, to increase sales.

“We see that the industry took a drug that was orginally prescribed only for end of life palliative care, cancer treatment, and they marketed it for chronic pain,” said Levin.

Hogsett says their pain pill addiction led to other addictions, like heroin which increased the number of overdose deaths.

“They all sought relief from pain and were instead administered addiction,” said Mayor Hogsett.

Nearly 350 people died as a result of opioid addiction in Marion County in 2016. It’s the highest number of overdose deaths to date in Marion County, but it doesn’t appear to be slowing down. In 2017 alone, Narcan, used to give naxolone to revive someone suffering from an overdose, has been administered more than 1,600 times. That’s a pace that will top last year’s record-high administrations of naxolone.

Levin listed OxyContin and oxycodone as examples of prescription pain medications that are of particular concern. He said Suboxone and methadone would not be included in the lawsuit.

“These potential defendants spread the false message that opioids were safe for chronic pain and not addictive,” Levin alleges.

Levin says the companies have legal obligations to report suspicious opioid orders: “They saw unquestionably suspicious orders of opioids but turned a blind eye to their legal duties and obligations to stop and report those orders.”

The suit will seek damages for what the city has had to pay for extra resources, such as paying police to respond to drug-related incidents or overdoses, social services and the Narcan used to revive people who have overdosed.

“Just the cost of Narcan for the county over the past year is astronomical,” said Levin. He couldn’t give a dollar amount but said, “When you drill down and you look at everything the city has paid, it’s a lot of money. There’s a lot of need going forward.”

They city is also looking for what they call forward relief — to cover the cost of resources they need to move forward.

They accused the companies of being motivated by money, saying three of the distributors make up nearly 90 percent of the opioid market, raking in more than $100 billion last year alone.

The city has said they will only pay Cohen and Malad if they receive money in the suit and in that case, the law firm would receive one-third of the funds awarded in the judgment. Indianapolis is the first city to pursue legal action against opioid manufacturers and distributors.

Following the announcement of the lawsuit, 24-Hour News 8 reached out to the manufacturers and distributors mentioned named by the city and received statements, as follow.

We are deeply troubled by the opioid crisis, and we are dedicated to being part of the solution. As a company grounded in science, we must balance patient access to FDA-approved medicines, while working collaboratively to solve this public health challenge. Although our products account for approximately 2% of the total opioid prescriptions, as a company, we’ve distributed the CDC Guideline for Prescribing Opioids for Chronic Pain, developed the first FDA-approved opioid medication with abuse-deterrent properties and partner with law enforcement to ensure access to naloxone. We vigorously deny these allegations and look forward to the opportunity to present our defense.

As distributors, we understand the tragic impact the opioid epidemic has on communities across the country. We are deeply engaged in the issue and are taking our own steps to be part of the solution – but we aren’t willing to be scapegoats. Distributors are logistics companies that arrange for the safe and secure storage, transport, and delivery of medicines from manufacturers to pharmacies, hospitals, long-term care facilities, and others based on prescriptions from licensed physicians. We don’t make medicines, market medicines, prescribe medicines, or dispense them to consumers. Given our role, the idea that distributors are solely responsible for the number of opioid prescriptions written defies common sense and lacks understanding of how the pharmaceutical supply chain actually works and how it is regulated. We are ready to have a serious conversation about solving a complex problem and are eager to work with political leaders and all stakeholders in finding forward-looking solutions.”

Wholesale drug distributors including AmerisourceBergen are logistics companies who are responsible for getting Food and Drug Administration (FDA) approved drugs from pharmaceutical companies who manufacturer them to Drug Enforcement Administration (DEA) registered pharmacies who dispense them based on prescriptions written by licensed doctors and health care providers. We do not have access to patient information, have no capability or desire to encourage prescribing or dispensing of pain medicines and are not qualified to interfere with clinical decisions between patients and their physicians. Beyond reporting and stopping orders determined to be suspicious, we also provide daily reports about the quantity, type and receiving pharmacy of every single order of controlled substances we distribute to regulatory and enforcement professionals. We intend to vigorously defend ourselves in this litigation while continuing to work collaboratively to combat drug diversion.”

The people of Cardinal Health care deeply about the devastation opioid abuse has caused American families and communities and are committed to helping solve this complex national public health crisis. We are industry leaders in implementing state-of-the-art controls to combat the diversion of pain medications from legitimate uses, and have funded community education and prevention programs for a decade. We operate as part of a multi-faceted and highly regulated healthcare system – we do not promote or prescribe prescription medications to members of the public – and believe everyone in that chain, including us, must do their part, which is ultimately why we believe these copycat lawsuits filed against us are misguided, and do nothing to stem the crisis. We will defend ourselves vigorously in court and at the same time continue to work, alongside regulators, manufacturers, doctors, pharmacists and patients, to fight opioid abuse and addiction.”