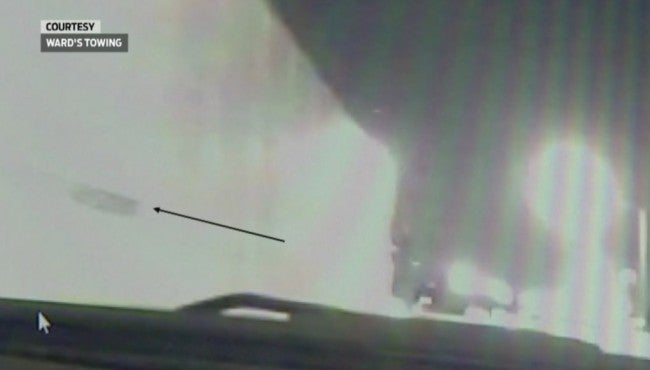 INDIANAPOLIS, Ind (WISH) — A tow truck driver is recovering in the hospital after a hit-and-run involving a semi on Interstate 70.

It happened in the eastbound lanes near the Harding Street exit at 2 a.m. Friday.

Jack Deaton, 53, was taken to Sidney and Lois Eskenazi Hospital with serious injuries. 24-Hour News 8 learned the tow truck driver had his lower left leg amputated. As of Friday night, he was in good condition.

Indiana State Police said Deaton was getting ready to tow a disabled car off the interstate when he was hit by a semi and that driver did not stop.

“The scene, it was crazy — there was just stuff everywhere. The people that helped are distraught from what they witnessed and then anger sets in,” said Charles Ward, the owner of Ward’s Towing.

Dashcam video from inside of Deaton’s tow truck shows the 18-wheeler semi that hit him as he stood on the right shoulder moving the truck bed. In the video, you can also see debris just seconds after the impact.

“Luckily the customers were on scene. The woman was a nurse, so she administered first aid which ultimately help saved his life,” Ward said.

Ward said Deaton has worked with his company for the past four years.

“He’s just a really good guy; he’s worried about everybody but him,” Ward said.

Ward said he and other coworkers have been stopping by the hospital to see Deaton.

“He’s a great employee and a great person and his life is altered through this now and the people responsible are just gone like nothing ever happened,” Ward said.

Ward said he believes the driver of the semi knew what happened from what he saw on the dashcam video.

“The semi just hits him, appears to slow down for a minute, then speeds back up and keeps going,” he explained.

Witnesses described the semi as a black cab with a white trailer. Ward is hoping someone out there will recognize the placement of what appears to be letters or numbers on the right side of the semi.

“It pains me that they just left, you know?” he said. “If there wouldn’t have been customers there and he had just been towing a car off the side of the road, this would be a different conversation; he wouldn’t be with us right now.”

This is the second time this week where an incident like this happened on the interstate.

On Wednesday, police said a trooper was hit during a traffic stop on I-865 near Zionsville.

“Put down your phones and pay attention to what you’re doing. Everybody’s out here doing a job and wanting to get home safe,” Ward said.

If you think you recognize the semi or have any information about the hit and run please call Indiana State Police at 317-899-8577.

As for Deaton, he remains in the intensive care unit and will have another surgery on Saturday.