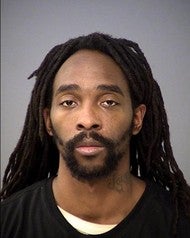 INDIANAPOLIS (WISH) – A Tuesday evening traffic stop led to the drug arrest of an Indianapolis man, according to the Indiana State Police.

ISP says a 2010 Dodge Charger, driven by 30-year-old Delance Johnson, was pulled over for running a stop sign in the area of Breen Drive and East 38th Street just before 11 p.m.

During the course of their investigation, it was discovered that the vehicle had been reported stolen out of Brown County. Officers also uncovered that Delance has six active warrants from Marion and Hamilton counties out for his arrest.

Johnson faces a number of preliminary charges including: