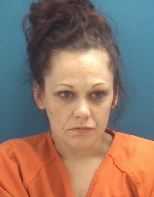 COLUMBUS, Ind. (WISH) – A Columbus traffic stop Thursday afternoon led to a drug arrest, according to the Columbus Police Department.

CPD says a vehicle, driven by 32-year-old Jessica Comstock, was pulled over in the 600 block of California Street at approximately 3:15 p.m. for being falsely registered.

Police say that during the stop, a K9 officer provided an indication of possible narcotics inside the vehicle. A subsequent search of the vehicle resulted in the discovery of syringes and other drug-related paraphernalia, officers say.

Comstock was then placed into custody and while searching her clothing, police found methamphetamine and heroin.

She was transported to the Bartholomew County Jail.

She faces the following preliminary charges:

Additionally, police say that all of the preliminary charges have taken on an added measure due to the fact that she was within 500 feet of a school during the stop.