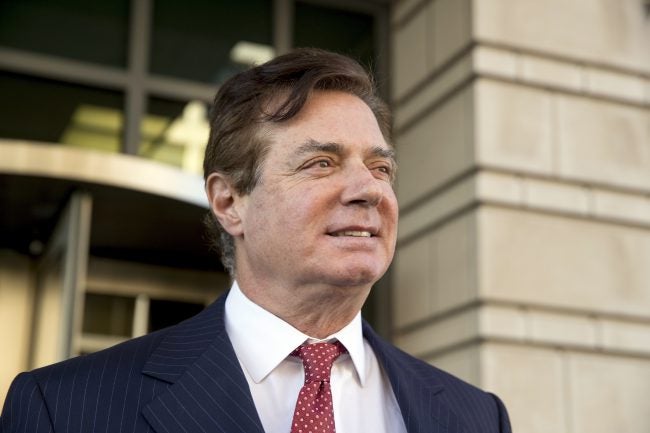 WASHINGTON (AP) — Two questions loom large as Paul Manafort prepares to walk into a federal courtroom Tuesday: Will Donald Trump’s former campaign chairman spend what effectively could be the rest of his life in prison? Or will special counsel Robert Mueller be handed a defeat in his team’s first trial since his appointment more than a year ago?

Those questions will be answered by 12 jurors selected this week as Manafort’s trial on tax evasion and bank fraud charges gets underway at the courthouse in Alexandria, Virginia. The pool of jurors will face questions from both sides and U.S. District Judge T.S. Ellis III as they try to weed out potential prejudice in what has become a highly publicized and politically divisive investigation.

That task comes as the president and his lawyer-spokesman, Rudy Giuliani, have intensified their attempts to undermine the Mueller investigation in the court of public opinion and as the president continues to waffle on whether he’ll sit for a private interview with prosecutors. The president criticized Mueller by name over the weekend and continues to refer to the special counsel investigation into Russian election interference as a “witch hunt” and “an illegal scam.”

While the main areas of Mueller’s investigation are Russia’s actions during the 2016 presidential election and any attempts by Trump to obstruct justice, none of those topics are expected to come up in Manafort’s trial. In fact, prosecutors said last week they don’t expect the word “Russia” to be mentioned at all.

Instead, the trial will center on Manafort’s Ukrainian consulting work and only briefly touch on his involvement with the president’s campaign.

Prosecutors have lined up 35 witnesses and more than 500 pieces of evidence they say will show how Manafort earned more than $60 million from his Ukrainian work and then concealed a “significant percentage” of that money from the IRS. Prosecutors will also argue that Manafort fraudulently obtained millions more in bank loans, including during his time on the campaign.

In particular, prosecutors say they will introduce evidence that a chairman of one of the banks allowed Manafort to file inaccurate loan information in exchange for a role on the Republican campaign and the promise of a job in the Trump administration that never materialized.

At the center of all this will be another Trump campaign aide, Rick Gates, who spent years working for Manafort in Ukraine and is also accused of helping him falsify paperwork used to obtain the bank loans. Gates, who cut a plea deal with Mueller earlier this year, is expected to testify against his former mentor.

Gates is also expected to play a key role in Manafort’s second trial scheduled for September. That trial, set in the District of Columbia, involves allegations that the longtime political consultant acted as an unregistered foreign agent for Ukrainian interests and made false statements to the U.S. government.

Manafort is the only American charged by Mueller to opt for a trial.

The other 31 people charged have either pleaded guilty or are Russians seen as unlikely to enter an American courtroom. Three Russian companies have also been charged. One of those companies has pleaded not guilty and is fighting the allegations in federal court in Washington.