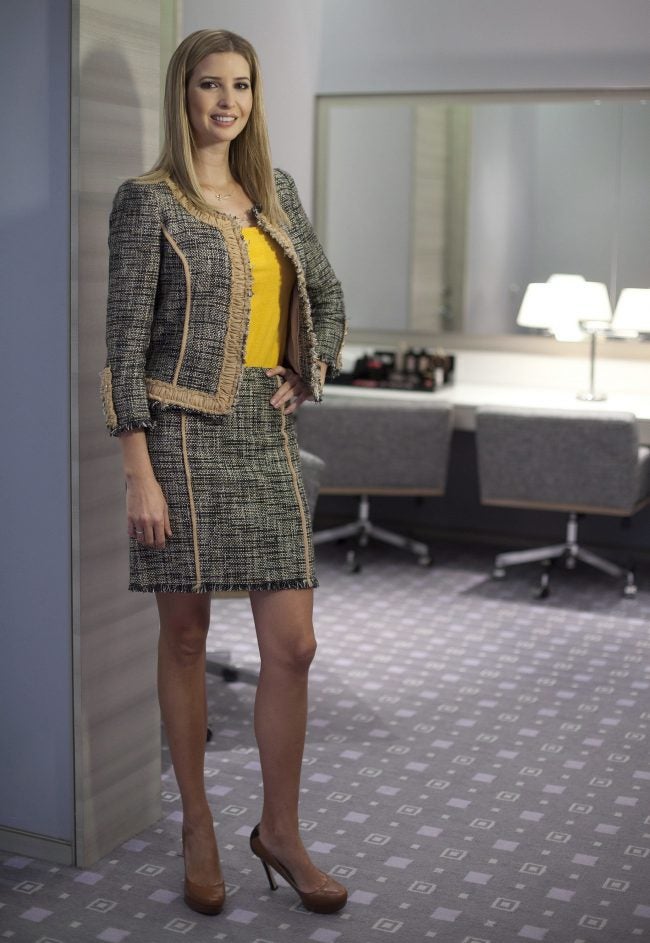 NEW YORK (AP) – Where the White House saw a father standing up for his daughter, an ethics expert saw an implicit threat.

Trump lashed out Wednesday at Nordstrom, the latest company to draw his Twitter attention, saying the department store chain that decided to stop selling his daughter’s clothing and accessory line has treated her “so unfairly.”

Though Trump has tweeted in the past about companies such as the U.S. automakers, Boeing and Carrier, his action drew a rebuke from ethics experts saying the fact that this one was about a business run by his daughter raised conflict-of-interest concerns. Trump’s tweet follows revelations that First Lady Melania Trump expected to develop “multi-million dollar business relationships” tied to her presence in the White House, according to a suit she filed.

In the tweet, Trump said, “My daughter Ivanka has been treated so unfairly by @Nordstrom. She is a great person – always pushing me to do the right thing! Terrible!” Posted first on his personal account, it was re-tweeted more than 6,000 times in less than an hour. It was also retweeted by the official @POTUS account.

Trump’s presidency has raised unprecedented concerns about ethical conflicts. His plan to separate himself from his sprawling real estate business has been criticized by ethics experts, who say it doesn’t do enough to make sure that Trump won’t make decisions to personally benefit himself, his family or his company. The first lady has yet to step away from her companies that manage her royalties from her namesake products, business documents show.

Kathleen Clark, a government ethics expert, said the Nordstrom tweet is problematic because other retailers may think twice now about dropping the Ivanka Trump brand for fear of getting criticized publicly by the president. She said it was especially disturbing that Trump retweeted his message on the official White House account.

“The implicit threat was that he will use whatever authority he has to retaliate against Nordstrom, or anyone who crosses his interest,” said Clark, a law professor at Washington University in St. Louis.

Trump has feuded with several consumer brands before and after winning the presidency. After Macy’s dropped his line of ties and shirts in 2015 over his comments about immigrants, Trump singled Macy’s out for having a tough holiday season. “Good news, disloyal @Macy’s stock is in a total free fall. Don’t shop there for Christmas,” he tweeted. And in January of this year, he scolded General Motors for “sending Mexican made model of Chevy Cruze to U.S. car dealers-tax free across border.” ”Make in U.S.A. or pay big border tax,” he said.

Trump’s supporters have also taken to Twitter on his behalf. A #BoycottStarbucks campaign gained traction after the company responded to Trump’s immigration order by saying it will hire 10,000 refugees over the next five years. Breitbart encouraged a #DumpKelloggs boycott after the cereal maker said it would no longer advertise on the news and opinion website, formerly run by Trump’s chief strategist Steve Bannon.

A social media campaign called “Grab Your Wallet” has urged a boycott of stores that stock Ivanka Trump or Donald Trump products, including a diverse list such as Dillard’s, Lord & Taylor and Amazon.

Nordstrom reiterated Wednesday that its decision was based on the brand’s performance. The company said sales of Ivanka Trump items had steadily declined over the past year, particularly in the last half of 2016, “to the point where it didn’t make good business sense for us to continue with the line for now.”

The company said it had discussed the sales performance with brand executives over the past year “and Ivanka was personally informed of our decision in early January.”

Nordstrom shares had dropped after the tweet, like those of some other companies Trump has criticized in the past, but they later recovered to close about 4 percent higher.

Retailer Belk Inc. said Wednesday it will no longer carry Ivanka Trump items on its website, but will offer them at its stores. The New York Times reported that TJX Cos., which operates T.J. Maxx, told employees not to display Ivanka Trump goods separately and to discard the brand’s signs, according to a memo obtained by the paper. TJX spokeswoman Doreen Thompson confirmed the memo and said it was “intended to instruct stores to mix this line of merchandise into our racks, not to remove it from the sales floor.” She said, “at this time, we continue to offer the line of merchandise.”

Other stores that carry Ivanka Trump items include Macy’s, which declined to comment. Lord & Taylor said only that it still carries the brand.

Rosemary K. Young, senior director of marketing at Ivanka Trump, said last week the brand is expanding and saw “significant” revenue growth last year compared to the previous year. Ivanka Trump has said she would take a leave of absence from her clothing and accessories business as well as the Trump organization.

White House spokesman Sean Spicer said Trump was responding to an “attack on his daughter” when he posted the tweet and that “he has every right to stand up for his family and applaud their business activities, their success.”

“For someone to take out their concern with his policies on a family member of his is not acceptable,” Spicer said.

Trump’s tweet was posted at 10:51 a.m. ET, a little over 20 minutes after the scheduled start of the president’s daily intelligence briefing in the Oval Office. Spicer waved off reporters’ questions about the timing, saying the president was not otherwise occupied when he wrote the tweet.

Retailers drop brands all the time because of poor performance, said brand consultant Allen Adamson, but given a highly charged political environment, perception is reality for loyal Trump fans.

“It is clearly hard for Nordstrom to tell the story that it is dropping (the brand) for business reasons,” said Adamson, founder of the firm Brand Simple. “The timing is awful. The environment is full of companies taking political stands. So in this environment it will be perceived as a political statement. Nordstrom is getting dragged into this even though they may not want to be.”

After Under Armour’s CEO Kevin Plank expressed support on CNBC on Tuesday for Trump being pro-business, a #Boycottunderarmour hashtag appeared. The clothing brand posted a lengthy statement Wednesday, saying, “We engage in policy, not politics.” It said it advocates for fair trade, an inclusive immigration policy and tax reform that helps create jobs.

Adamson said companies need to be clear, firm and succinct in their message. But “they shouldn’t get into a Twitter war with the president,” he added. “That is a no-win situation.”