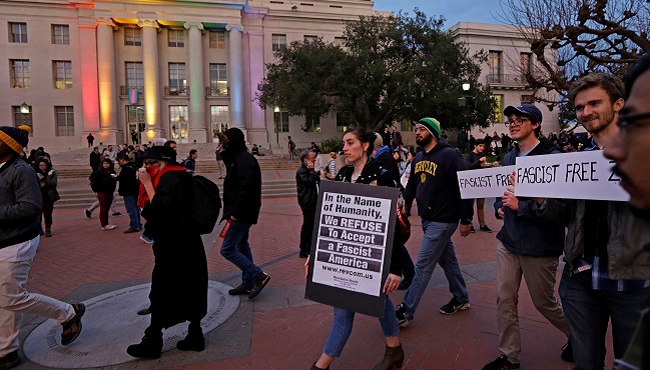 BERKELEY, Ca. (KRON) – President Trump took to Twitter early Thursday morning to respond to the protests at the University of California at Berkeley that turned violent.

The crowd was protesting a right-wing commentator’s appearance at the school. The school even canceled Wednesday’s talk by Milo Yiannopoulos, an editor of Breitbart News, after some 1,500 people had gathered outside the venue.

But officials said it was a smaller group of protesters dressed in black and in hooded sweatshirts that showed up as night fell to break windows with metal barricades, throw smoke bombs and flares and start a large bonfire outside the building with a diesel generator.

If U.C. Berkeley does not allow free speech and practices violence on innocent people with a different point of view – NO FEDERAL FUNDS?- Donald J. Trump (@realDonaldTrump) February 2, 2017