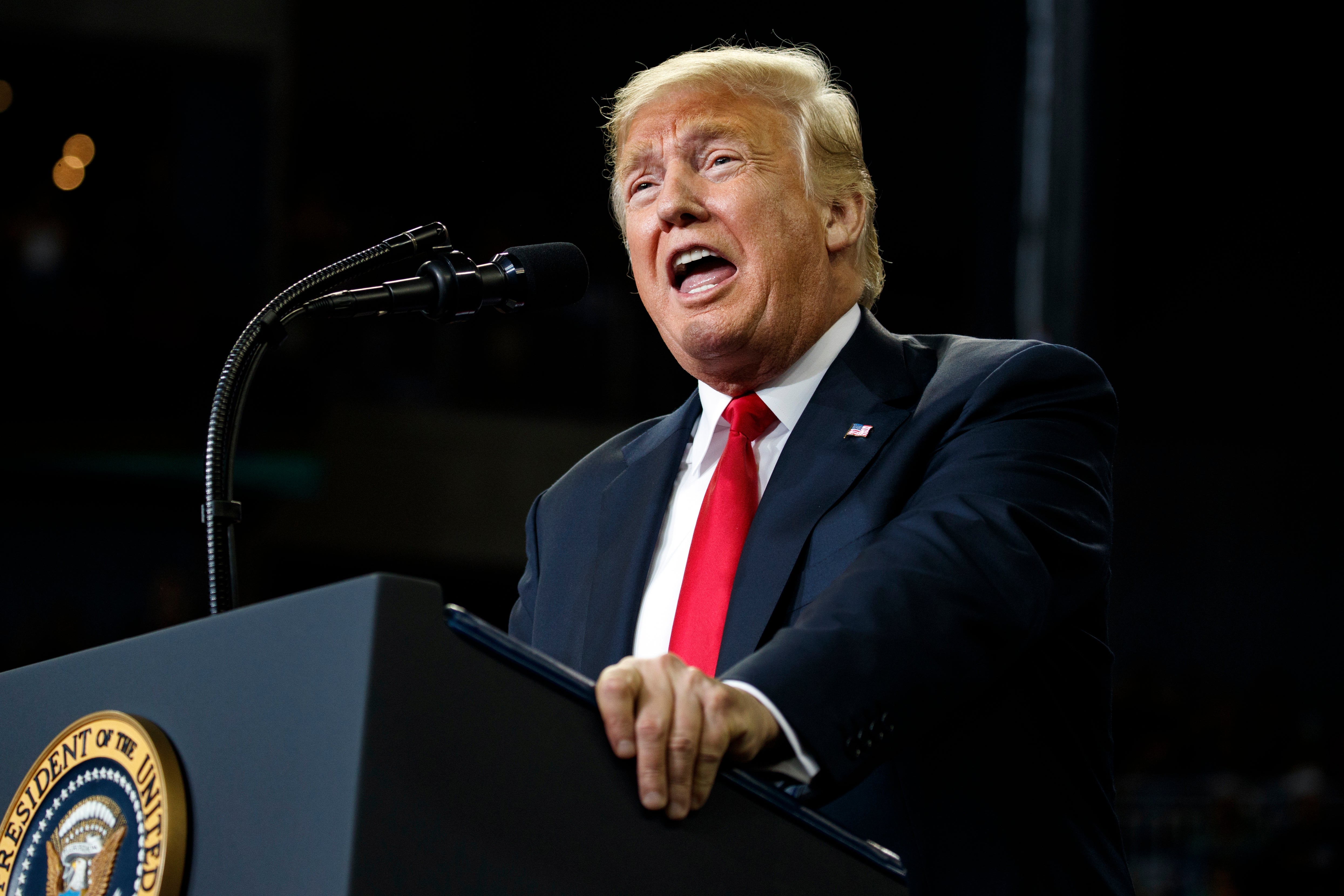 EVANSVILLE, Ind. (AP) — Casting the midterms as a referendum on his agenda, President Donald Trump urged Indiana Republicans on Thursday to unseat Sen. Joe Donnelly, saying the vulnerable Democrat is “not going to vote for us on anything.”

Trump, who is kicking up his campaign travel as the midterm elections near, appeared in Evansville to boost support for wealthy Republican businessman Mike Braun, who is facing off against Donnelly in what is viewed as one of the nation’s most competitive Senate races.

Before a wildly enthusiastic crowd, Trump called Braun a “special guy” and said he will “be a truly great senator.” Braun took the stage and pledged to be a “true ally” to Trump, “not somebody that says something when you’re in Indiana and does something differently when you’re in D.C.”

In a state the president carried by roughly 19 percentage points in 2016, both candidates have sought to stress their connections to Trump. Braun has welcomed Trump’s backing, greeting him at the airport as he arrived in Indiana on Thursday. Before the rally, Trump attended a private roundtable and fundraising reception.

Donnelly’s campaign pushed back on Trump’s critique, citing a study from Congressional Quarterly that shows he voted with Trump 62 percent of the time in 2017 and noting that the candidate had 22 proposals signed into law by Trump.

“He’s always willing to work with any president who has a good idea to help Hoosiers, but he’s never been, and never will be a rubber stamp for ideas from any administration that are wrong for Indiana,” said campaign manager Peter Hanscom.

Donnelly said in a statement after the rally: “We’re always happy to have President Trump in Indiana, but Hoosiers still want a senator who always puts them first before any politician or political party.”

The president returned to the campaign trail after a bruising stretch, including widespread condemnation for his muted response to the death of Republican Sen. John McCain of Arizona, the revelation that key outside associates had been granted immunity as part of one of the investigations circling the White House and a plea deal from his former personal attorney and the conviction of his onetime campaign chairman.

Trump did not mention McCain amid a five day stretch of national mourning for the longtime Arizona lawmaker and decorated war veteran with whom the president had long feuded. Trump drew harsh criticism for staying quiet for two days before issuing a terse statement honoring McCain’s death.

Trump’s speech largely focused on his favored talking points. He pushed his agenda, arguing that Democrats in power would halt his efforts to cut taxes and roll back regulation and would block his long-promised border wall. To deafening applause he argued that “Republicans want strong borders” and said “Democrats want to abolish ICE,” the government agency tasked with enforcing the nation’s immigration laws.

Trump also promoted his record, again calling the economy the best in the “history of our country” and boasting about “putting tariffs on foreign producers who cheat our workers and cheat our companies.” The economy and jobs are nowhere close to historic bests based on several measures. And Trump’s decision to impose tariffs on steel and aluminum imports would help many domestic steel and aluminum mills while likely increasing prices for the factories that rely on those metals.

Trump again threatened to intervene in the Justice Department if it fails to take the actions he’s demanding, saying the leaders of the DOJ and FBI “have to start doing their job and doing it right” because “people are angry.”

If they don’t do their job, he said, he “will get involved and I’ll get in there if I have to.”

Trump has a long-standing feud with Attorney General Jeff Sessions and has called on him to investigate former rival Hillary Clinton and others. Some of the issues he’s raised have either already been examined or are in the process of being investigated.

Early in the rally, a volunteer member of Trump’s advance team blocked a photojournalist’s lens as he tried to take a photo of a protester inside the arena. Trump paced on stage during the moments it took for the protester to be led out.

Heading into the final months of campaigning, the Republican Party is defending its majorities in the House and Senate, facing retirements and an energized Democratic opposition. Democrats are increasingly bullish about their chances to capture the 23 seats they need to retake the House. But flipping the Senate remains a much tougher prospect, given that 10 incumbents are running in states Trump won.

Trump is aiming to spend more than 40 days on the campaign trail between the beginning of August and the Nov. 6 midterms. The officials said Trump wants to be on the road for Republicans more than Obama was for Democrats in 2010 — when his party suffered what Obama called a “shellacking” — and beyond what President George W. Bush did in 2002.