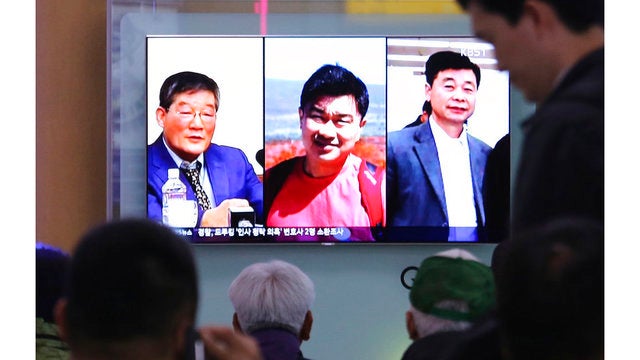 Trump called it a “great honor” to welcome the detainees to the U.S. and added, “The true honor is going to be if we have a victory in getting rid of nuclear weapons.”

Joined by the former detainees, Trump thanked North Korea’s Kim Jong Un for releasing the Americans, and said he believes Kim wants to reach an agreement on denuclearizing the Korean peninsula. “I really think he wants to do something,” the president said.

First lady Melania Trump, Vice President Mike Pence and a host of senior administration officials joined Trump to celebrate the occasion at Joint Base Andrews near Washington. The men, Kim Dong Chul, Kim Hak Song and Tony Kim, had been released Wednesday amid a warming of relations between the longtime adversaries.

The president and first lady boarded the medical plane on which the men traveled to take a private moment with them, then appeared at the top of the airplane stairway with the three and applauded as the men held up their arms in what appeared to be gestures of triumph.

“This is a special night for these three really great people,” Trump told reporters as he stood on the tarmac with the former detainees. On the U.S. relationship with North Korea, Trump declared, “We’re starting off on a new footing.”

The freed prisoners appeared tired but in excellent spirits, flashing peace signs as they emerged from the aircraft. They were joined by a translator who said “it’s like a dream” and that the men were “very, very happy” to be freed.

As the men entered into view, U.S. service members on the tarmac burst into applause and cheers.

After Trump’s remarks, the three men boarded a bus for Walter Reed National Military Medical Center. The White House said earlier they would be evaluated and receive medical treatment at the Washington-area facility before being reunited with their families.

Secretary of State Mike Pompeo had secured their release in Pyongyang after meeting with North Korean leader Kim Jong Un on final plans for the Trump-Kim summit. The Americans had boarded Pompeo’s plane out of North Korea without assistance and then transferred in Japan to the Boeing C-40 outfitted with medical facilities for the trip back to the U.S.

Shortly after they touched down on American soil in Alaska — for a refueling stop Wednesday afternoon — the State Department released a statement from the freed men.

“We would like to express our deep appreciation to the United States government, President Trump, Secretary Pompeo, and the people of the United States for bringing us home,” they said. “We thank God, and all our families and friends who prayed for us and for our return. God Bless America, the greatest nation in the world.”

Singapore has emerged as the likely host of the summit, late this month or in early June, as Trump seeks to negotiate denuclearization of the Korean peninsula in his highest-stakes foreign policy effort yet. Trump announced Wednesday that the demilitarized zone between the Koreas would not host the summit. Pompeo said the meeting would last one day and possibly a second.

Trump made a point of publicly thanking North Korea’s leader for the prisoners’ release — “We want to thank Kim Jong Un” — and hailed it as a sign of cooling tensions and growing opportunity on the Korean peninsula. Kim decided to grant amnesty to the three Americans at the “official suggestion” of the U.S. president, said North Korea’s official news agency, KCNA.

North Korea had accused the three Korean-Americans of anti-state activities. Their arrests were widely seen as politically motivated and had compounded the dire state of relations over the isolated nation’s nuclear weapons.

Trump entered office as an emboldened North Korea developed new generations of nuclear weapons and ballistic missiles capable of hitting the continental U.S. Those advances were the subject of President Barack Obama’s starkest warning shortly before Trump took office, and this is a crisis he’s convinced his negotiating skills can resolve.

Crediting himself for recent progress, Trump has pointed to Kim’s willingness to come to the negotiating table as validating U.S. moves to tighten sanctions — branded “maximum pressure” by the president. The wee-hours ceremony Thursday was to be an early celebration for an issue that has already put the prospect of a Nobel Peace Prize on Trump’s mind.

“Everyone thinks so, but I would never say it,” he said Wednesday when asked if the award was deserved.

The release capped a dramatic day of diplomacy in Pyongyang. After Pompeo’s 90-minute meeting with Kim Jong Un, he gave reporters a fingers-crossed sign when asked about the prisoners as he returned to his hotel. It was only after a North Korean emissary arrived a bit later to inform him that the release was confirmed.

The three were the latest in a series of Americans who have been detained by North Korea in recent years for seemingly small offenses and typically freed when senior U.S. officials or statesmen personally visited to bail them out.

The highly public and politically tinged arrival ceremony for the former prisoners organized by the White House was in stark contrast to the low-key and very private reception that the State Department had envisioned and carried out from the moment they took custody of them.

Department officials took great pains on their release in North Korea, as well as on their flights to Japan and Alaska, to keep them sequestered not only from the two journalists traveling with Pompeo but also from staffers not immediately involved in their cases. The trio, along with medical personnel, including a psychiatrist, were cloistered in the middle of Pompeo’s plane in a small section of 12 business class-sized seats that was cordoned off by curtains on both ends.

State Department officials refused to discuss anything but the most basic details of their conditions, citing privacy concerns in keeping with the minimal amount of information they had released since the men were imprisoned.

The last American to be released before this, college student Otto Warmbier, died in June 2017, days after he was repatriated to the U.S. with severe brain damage.

Warmbier was arrested by North Korean authorities in January 2016, accused of stealing a propaganda poster and sentenced to 15 years in prison with hard labor. His parents, Fred and Cindy Warmbier, have filed a wrongful death lawsuit, accusing the government of torturing and killing their son.

“We are happy for the hostages and their families,” the Warmbiers said in a statement Wednesday. “We miss Otto.”

Of the newly released detainees, Kim Dong Chul, a South Korean-born U.S. citizen, had been held the longest. The former Virginia resident was sentenced in April 2016 to 10 years in prison with hard labor after being convicted of espionage. He reportedly ran a trade and hotel service company in Rason, a special economic zone on North Korea’s border with Russia.

The other two detainees hadn’t been tried.

Kim Hak Song worked in agricultural development at an experimental farm run by the Pyongyang University of Science and Technology, or PUST. The university is the only privately funded college in North Korea and was founded in 2010 with donations from Christian groups. He was detained last May for alleged anti-state activities.

Tony Kim, who also uses the name Kim Sang-duk, was detained in April 2017 at the Pyongyang airport. He taught accounting at PUST. He was accused of committing unspecified criminal acts intended to overthrow the government.

On Capitol Hill, Senate Democratic leader Chuck Schumer celebrated the detainees’ return but warned that “we’ll see many more hostages” if the administration provides an incentive for imprisoning Americans.

“We are happy they’ve returned, but North Korea shouldn’t gain by taking Americans and then releasing them,” he said.

After the release of the detainees Thursday, North Korea’s state-run media explicitly mentioned plans for the summit for the first time Thursday. Pyongyang has been exceptionally cautious about its public framing of Kim’s recent diplomatic moves, which are a major shift from the more aggressive focus on missile launches and nuclear development that heated tensions to a boil last year.