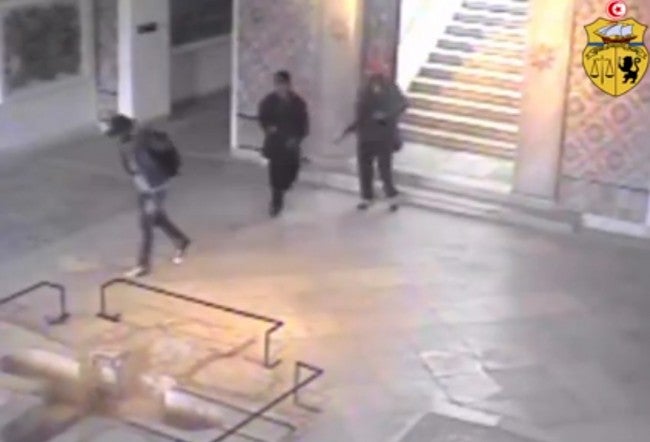 TUNIS, Tunisia (AP) – A third attacker in the deadly assault on the Bardo museum is on the run, Tunisia’s president said Sunday, declaring his country at war with the extremists who killed 21 people at one of North Africa’s most revered cultural institutions.

President Beji Caid Essebsi said the attack involved “three aggressors” and the third man escaped. He was speaking live with French network iTele from inside the museum, its elaborate tilework visible behind him.

Tunisia’s Interior Ministry released security camera footage of Wednesday’s attack showing two gunmen walking through the museum, carrying assault rifles and bags. At one point they encounter a third man with a backpack walking down a flight of stairs. They briefly acknowledge each other before walking in opposite directions.

Police responding to the attack shot and killed the two gunmen. They were identified as Tunisians in their 20s who had trained in Libya.

Essebsi said the extremists who have recruited about 3,000 Tunisians to fight in Iraq and Syria have no credible connection to Islamic belief. He said his country was at war with them.

“When war is brought upon us, we will wage war,” he said.