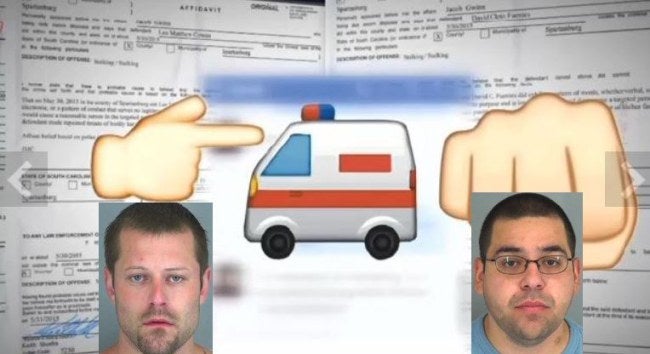 Deputies said David Fuentes, 29, and Matthew Cowan, 29, each sent text messages through Facebook using emoticons of a closed fist, an “L-shaped,” hand gesture that appeared to resemble a gun and an ambulance.

It’s unclear what prompted the text messages, but deputies said the pair have a history of problems with the man who filed the complaint. Deputies said the alleged victim filed an incident report on May 14 against both Fuentes and Cowan, claiming the pair tried to assault him at a house.

“I use them almost every day,” said Desiree Staggs of Spartanburg, “and I’m very specific about what I send because it can be taken literally out of text.”

If convicted, Fuentes and Cowan each faces up to five years in prison.