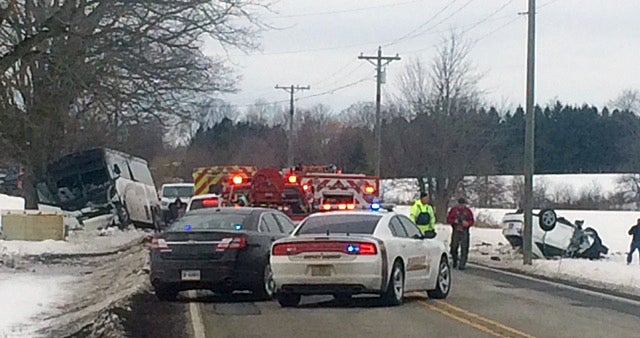 CHURUBUSCO, Ind. (WANE) — The founder of Mike’s Express Carwash, Edward M. Dahm was killed when the small SUV he was driving collided head-on with a charter bus along U.S. 33 north of Churubusco Thursday morning. 17 other people were hospitalized, including one who was left in critical condition.

Police and medics were called around 11:15 a.m. Thursday to U.S. 33 and Blue Lake Road north of Churubusco on a report of a crash. Dispatchers would only confirm “there was a bus crash” that involved “multiple vehicles and multiple injuries.”

A Barons Bus coach was left heavily damaged and off the roadway. Another vehicle, a small white Lexus SUV, could be seen on its top on the other side of the roadway. The two appeared to have hit head-on.

A source at the scene said initially there were roughly 50 patients.

As of now, an adult male was killed. Parkview’s Samaritan medical helicopter landed at the scene around 11:45 a.m. Duane Ginder, EMS Manager at Parkview Whitley, said it airlifted another person away in critical condition. Sixteen others were taken to area hospitals with minor injuries, Ginder said.

A triage base was established at the Smith Township Fire Department.

A Barons Bus official would not comment on the crash. There were 42 people aboard. Passengers said the bus was headed to Columbus, Ohio, from Chicago, with its next scheduled stop in Fort Wayne.

U.S. 33 at Blue Lake Road was closed in both directions, officials said.