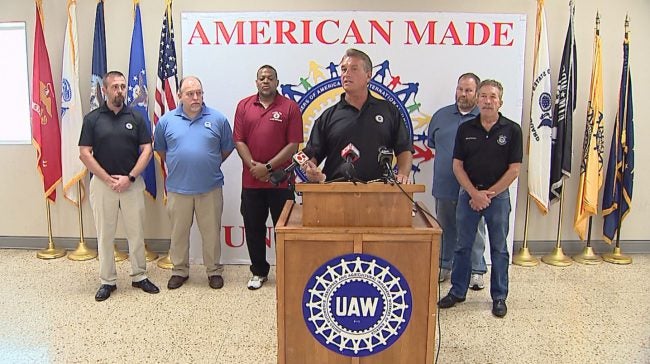 The ad makes use of video taken during a Todd Young speech in 2010. He’s talking about the federal government bailout of the auto industry. “What a waste,” says Young. “All the more reason to let it go belly up.”

It’s a position that was popular then but public opinion has shifted in support of the bailout since. When asked if Young stands by what he said in 2010 spokesman Jay Kenworthy said, “Congressman Young is focused on the future and that means creating an environment for jobs here in the United States.”

But while Young seeks to move on, the UAW wants to dwell on what he said in 2010.

“In more than one occasion he has called it a complete waste of money,” said Jim Bewley of the UAW. “He has called out in his own words that the automakers should go belly up.”

Evan Bayh supported the auto bailout when he was in the Senate in 2010 and both he and the UAW want voters to know that now.

“So we’re here to support Evan Bayh because he has not only in the past proved he will support working Americans and Hoosiers specifically,” said Bewley, “but he will continue to do so.”

A union endorsement for a Democratic candidate is no surprise but the auto industry bailout affects people in all walks of life in Indiana.

Clearly Bayh hopes his message will appeal to independent voters as well.