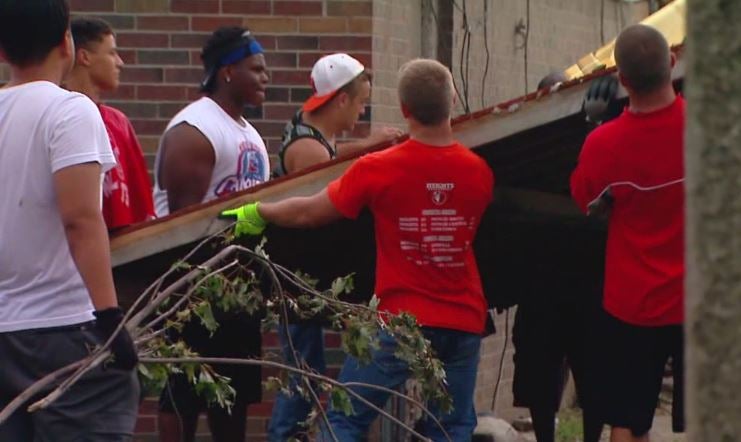 KOKOMO, Ind. (WISH) — There’s a certain excitement on Friday nights when two football teams prepare to collide. But with no game on the line, two opponents channeled their energy in Kokomo for the greater good.

Marching down Belvedere Drive, Kokomo High School football players and their opponents from Hamilton Heights High School joined forces to bring relief to a tornado ravaged town. The storm damage forced the teams to cancel their game, which was slated to be played at Lucas Oil Stadium in Indianapolis.

“This is not their community — it’s ours,” Kokomo quarterback Kyle Wade said of his opponents. “Them coming to help us is just very selfless. Just great to go with us and team up. Instead of playing each other, we’re on one team, playing against [the storm damage]. It’s fun to watch.”

“It makes me feel pretty good that two communities that were supposed to be somewhat rivalries tonight can come together like this and work together,” Williams said.

If that’s how the players feel, one could imagine what it means for the homeowners to get such a lift physically and emotionally after a tough two days.

“That’s awesome, awesome stuff,” said homeowner Tony Taflinger after two football players carried an air conditioning unit for him. “That’s what this community’s about, helping each other.”

The night was clearly about working together. There was no final score, but one could argue Friday’s effort might have been each team’s biggest win of the season.

“Next year, it’s going to be kind of weird on the feeling, I think, playing these guys. But it’s going to be a great thing too,” said Kokomo HS head coach Brett Colby. “I think they’ll have this memory forever.

Besides the players and coaches, cheerleaders from Kokomo High School, the referees scheduled to officiate the game and several more community volunteers joined in on the effort. There was enough people to fill four school buses. The groups diverted to different parts of the community and worked for almost two hours before rain rolled in.

Colby felt the effort was the perfect learning lesson for all of the players. “You just got to keep giving. You can never give too little or never give too much. Every little bit helps,” he said.

Even though the players missed out on their chance to take the field at Lucas Oil Stadium, they’ll still get a chance to get in the building Saturday. The Indianapolis Colts gave the players from both teams enough tickets for their families for the preseason game against the Philadelphia Eagles. The Kokomo players will also be honored on the field before the game.