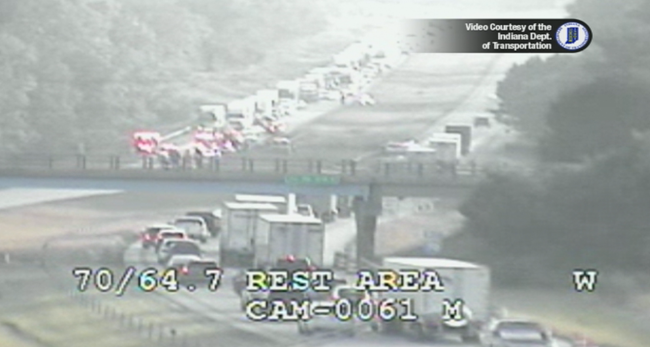 PLAINFIELD, Ind. (WISH) – Shanice Falls of Tucson Arizona was killed and her grandmother, Janice Ellington, also of Tucson was injured in an accident on Interstate 70 at the 63.4 mile marker, near Plainfield.

According to the Hendricks County Sheriff’s Department, Falls, 22, and Ellington, 60,  were traveling to Ohio to meet family.

Officials said Falls was pronounced dead at the scene.  Ellington, the driver, was transported to Sidney & Lois Eskenazi Hospital to be treated for her injuries.

The women were traveling eastbound on I-70 when their vehicle went across the median and westbound lanes of I-70.

Their vehicle was found by two fisherman, inverted, in White Lick Creek. Officials do not know how long they were in the creek before being discovered.

The accident shut down all westbound lanes on I-70. Fire, police and EMS all responded to the scene.

The vehicle had to be brought back on the interstate for investigators to reconstruct the accident.