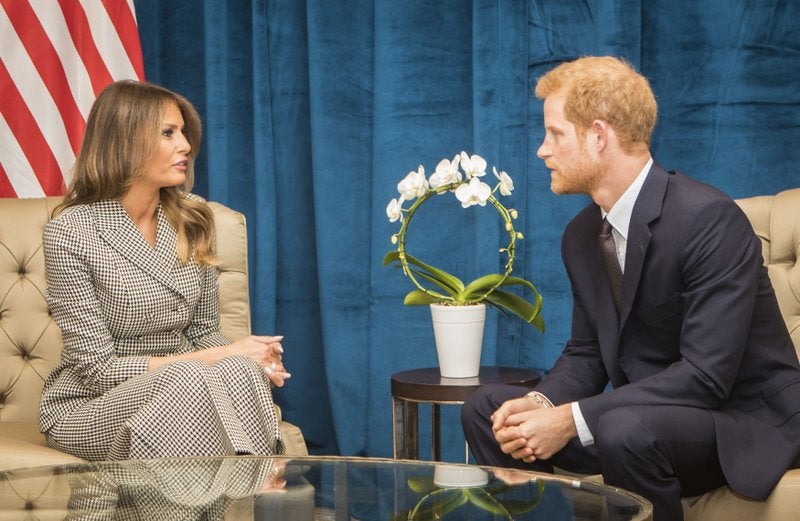 TORONTO (AP) – U.S. first lady Melania Trump met Saturday with Britain’s Prince Harry as she led a delegation to Toronto for the opening of an Olympic-style competition for wounded service members and veterans that he founded several years ago.

Mrs. Trump was heard telling the prince that she had just arrived on a flight from Washington, her first solo trip outside of the United States as first lady. It was also her first time meeting the prince, the White House said.

The first lady also planned to meet Saturday with Canadian Prime Minister Justin Trudeau, address the nearly 100 U.S. athletes participating in the weeklong Invictus Games and attend the opening ceremony before returning to the White House.

President Donald Trump was spending the weekend at his golf club in central New Jersey.

“Nice to meet you,” Harry said as he was introduced to Mrs. Trump and they shook hands. They stood together and smiled for the British and American news media before sitting in adjoining club chairs placed in front of their countries’ respective flags.

Harry remarked on how busy the first lady has been.

“Yes, very busy,” she said, before offering a compliment in return. “You’re doing a fantastic job,” she said.

“She feels strongly that they — and their families — should be honored every day,” Grisham said.

Grisham said Mrs. Trump also has “great admiration for the role the games have played in empowering those who have been injured while serving.”

At a recent event marking the 70th anniversary of the U.S. Air Force, the first lady thanked the many military members who assisted thousands of people in Texas, Louisiana, Florida and the Caribbean whose lives were upended by recent hurricanes.

“You endure time apart, are expected to move when new orders come in, and face the uncertainty that can come in times of need,” she said at Joint Base Andrews in Maryland, before introducing her husband. “This kind of lifestyle requires its own kind of courage and your sacrifices do not go unnoticed or unappreciated.”

Mrs. Trump has been slowly warming up to her new role, waiting to move to the White House until her 11-year-old son finished the school year in New York and holding few public events of her own. She accompanied the president on his three overseas trips so far this year.

Prince Harry, a military veteran who served two tours of duty in Afghanistan, established the Invictus Games in 2014 for sick and wounded service members and veterans from around the globe. More than 550 people from 17 countries are expected to participate in 12 sports during the coming week, ranging from cycling to wheelchair tennis to sitting volleyball.

London was the setting for the inaugural event in 2015, followed by Orlando, Florida, last year.