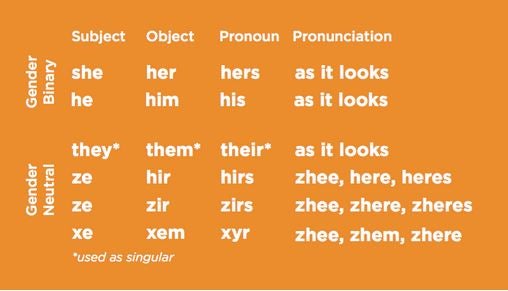 KNOXVILLE (WATE) – The University of Tennessee is asking students to use “ze, hir, hirs, and xe, xem, xyr.”

No, those words are not another language. According to the University of Tennessee, they’re actually the gender-neutral singular versions of pronouns.

The University of Tennessee Office for Diversity and Inclusion is asking students and faculty to use the pronouns in order to create a more inclusive campus. They say it alleviates a heavy burden for people expressing different genders or identities.

“We should not assume someone’s gender by their appearance, nor by what is listed on a roster or in student information systems,” Donna Braquet, the director of the University of Tennessee’s Pride Center said. “Transgender people and people who do not identify within the gender binary may use a different name than their legal name and pronouns of their gender identity, rather than the pronouns of the sex they were assigned at birth.”

For the first week of classes, Braquet is also asking teachers to ask everyone to provide their name and pronoun instead of calling roll. “The name a student uses may not be the one on the official roster, and the roster name may not be the same gender as the one the student now uses,” ze said.

“These may sound a little funny at first, but only because they are new,” Braquet said. “The she and he pronouns would sound strange too if we had been taught ze when growing up.”

Braquet said if students and faculty cannot use ze, hir, hirs, xe, xem or xyr, they can also politely ask. “’Oh, nice to meet you, [insert name]. What pronouns should I use?’ is a perfectly fine question to ask,” ze said.

Others, like State Representative Bill Dunn with the 16th District, believe the idea is taking things too far.

“I think it’s good to say someone is a ‘he’ or a ‘she’. That tells somebody something. If you say I’m going to meet ‘ze,’ someone’s going to think you’re going to meet someone from another planet,” Dunn said.

“We have paid people a lot of money to sit around and come up with this nonsense. It makes me kind of mad,” he added.

The University of Tennessee’s Media and and Internal Relations director, Karen Ann Simsen, said she would like to stress there is no mandate or official policy to use the language. “The information provided in the newsletter was offered as a resource for our campus community on inclusive practices,” said Simsen.