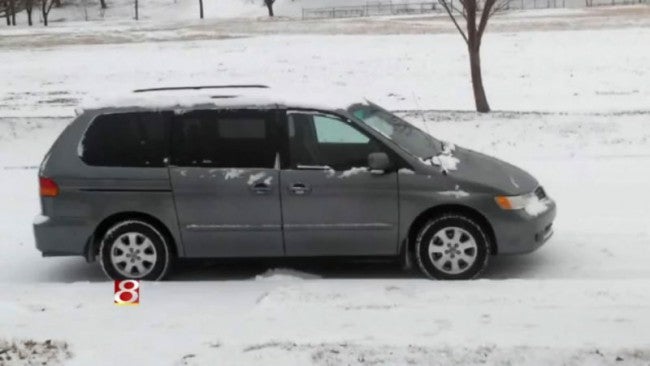 INDIANAPOLIS (WISH) – An Indianapolis man thought he was doing the right thing by warming up the family’s van to take his pregnant wife to the hospital, but as they were heading out the door someone drove off with it.

It happened near the corner of West Wyoming and Kappes Wednesday afternoon.

The family is just praying that someone out there watching will recognize their blue 2002 Honda Odyssey and call police.

Daniel Langley is still trying to wrap his mind around what happened.

“Really, what I want to do is go start knocking on doors and go old school Liam Neeson style and find out who did this,” said Daniel Langley, theft victim. “But I’m just really trying to stay calm.”

His wife is 37 weeks pregnant and is due with a boy any moment now.

“She had been telling me that morning when I left for work she was crying on the couch,” said Langley. “I knew she was in pain, but we decided to go ahead and go to work to make sure it was a real thing.”

But Kathryn says the contractions were so bad she couldn’t wait any longer. Daniel rushed home to take his wife and their two kids to the hospital. He says he started their van and was running back and forth loading it up with bags.

“I came back inside for a couple of minutes or maybe five minutes tops,” said Langley. “Everybody had their coat on went to go out the door and it was just gone.”

Kathryn Langley tells 24-Hour News 8 she stood there in pain and couldn’t believe her eyes.

“I immediately just started crying,” said Kathryn. “I didn’t think there was any reason for him to move it. Everything that we need was in there.”

Daniel says the family bought the car days ago and has not had the chance to go to the BMV yet.

The inside of the van had bags filled with baby clothes, blankets, two car seats, and important documents, like the couple’s marriage license.

Daniel plans to use the car to take his wife and kids on a summer vacation. Now he’s left hoping that whoever took his family’s van will return it: no questions asked.

“I don’t want it to ruin their life. I really wish somebody would see it, whoever did it would park it somewhere and text my phone,” said Langley. “I won’t call the police. I just want my stuff back. I just want my vehicle back.”

Daniel says the delivery turned out to be a false alarm. The van is described as a blue 2002 Honda Odyssey with license plate number VHL390.

Anyone with information is asked to call police.