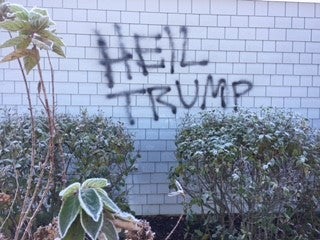 BROWN COUNTY, Ind. (WISH) – More than two weeks after a hateful messages were spray painted on a Brown County church, the community is coming together to wash it away.

Someone spray painted “Heil Trump” and drew a swastika on St. David’s Episcopal Church in Bean Blossom on Nov. 15.

It is the first time the church has been vandalized since 1959.

On Wednesday, church leaders invited people to come together to pray and take turns washing the graffiti off the church.

“Swastikas and homophobic language… That just doesn’t sit well with most people and certainly not with us and most people in this parish,” said John Bridge of Trinity Episcopal Church in Indianapolis.

He was just one of many who showed up to help clean Wednesday evening.

Church leaders say they believe St. David’s was targeted because it is known as being a very inclusive church.

For more than two weeks they left the messages up, saying cleaning them off together is an important part of the healing process.

“My congregation were hurt and angry. The physical action of being able to clean this off takes control back, takes the power back and says, you can’t hurt us,” said Rev. Kelsey Hutto.

Right now it is still unclear who left those messages on the church.