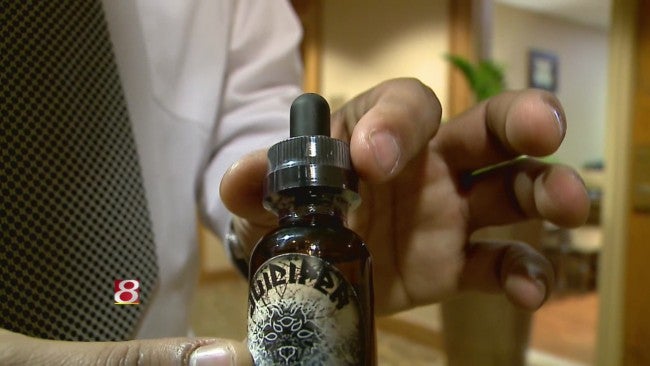 INDIANAPOLIS (WISH) – A bill that would regulate the e-cigarette industry in Indiana is gaining steam. But some vapor shop owners worry that if amendments aren’t made to it, stores will be forced to close.

Senate Bill 539 would prohibit retailers from selling e-liquids to minors. They also couldn’t sell the liquid unless it came with a tamper-proof seal.

But there’s one provision in the bill in particular, which targets the manufacturers, that retailers worry would cripple them in the long run.

“Our industry has been self-regulating itself since we started,” said Shadi Khoury, owner of Indy E cigs.

The proof is right in his hands. Khoury was holding two e-liquid bottles similar to what he sells in his stores. They’re complete with tamperproof seals and child-resistant caps.

But that’s not all Senate Bill 539 requires. It wants those who manufacture the liquid to get a permit issued by the Alcohol and Tobacco Commission. If they don’t, stores like Indy E Cigs aren’t allowed to sell their product. Khoury said he gets 99 percent of his e-liquid from California, a state that doesn’t require manufacturers to have a permit.

He worries that if Indiana vapor shops can’t sell those products, they’d be forced to close.

“You’re sending these customers to the online world. There’s no restrictions on that,” he said.

“We can’t control some of that stuff but what we can control is what is sold in Indiana and that’s what we’re trying to do and we’re trying to find that fair balance,” he said.

Sen. Yoder said he understands the concern from business owners. That’s why the bill has already been amended. The price a manufacturer would pay for permit was reduced from $5,000 to $1,000.

But getting rid of the rule is unlikely.

“Under my bill, if you want to buy a product from California, a wholesaler or manufacturer that makes it out there, they’re going to have to follow the Indiana laws which I don’t think onerous to be honest,” he said.

Khoury said he’s ready to have that conversation with his manufactures. He’s just hoping they’re ready to listen.

“I do see a need for the products that we do sell to be regulated to protect the consumer, but it can’t be done at small business owners’ expenses,” said Khoury.

The bill unanimously passed through the tax and fiscal committee Tuesday.

Sen. Yoder and Khoury plan to meet Wednesday to discuss if further amendments should happen. Both sides said they want to work together to create a bill that’s fair.

Sen. Yoder said if both pass their respective house they won’t have to get the other house’s approval.

Instead, they’ll go straight to the governor. Also, any amendments made to SB 539 would also be made to HB 1432 to keep them equal.