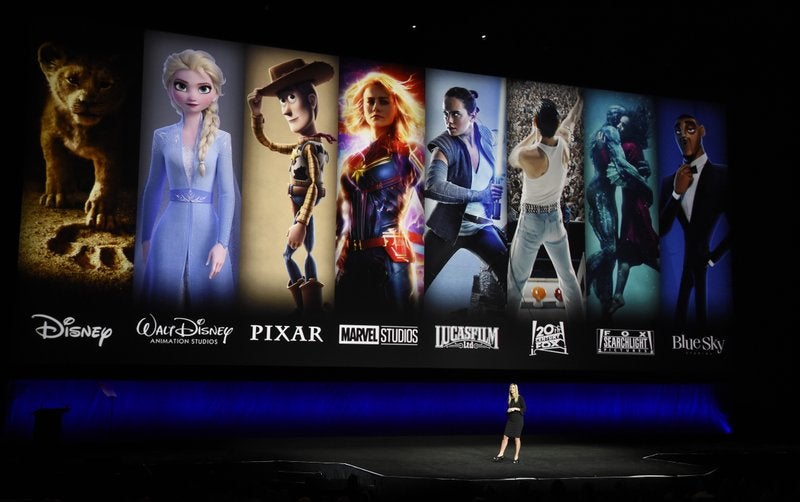 FILE - In this April 3, 2019, file photo characters from Disney and Fox movies are displayed behind Cathleen Taff, president of distribution, franchise management, business and audience insight for Walt Disney Studios during the Walt Disney Studios Motion Pictures presentation at CinemaCon 2019, the official convention of the National Association of Theatre Owners (NATO) at Caesars Palace in Las Vegas. Verizon is offering new and current customers a free year of Disney+ as the battle for streaming customers heats up. The offer extends to certain new and existing 4G and 5G customers as well as new Verizon Fios and 5G home internet customers. The promotion begins Nov. 12. (Photo by Chris Pizzello/Invision/AP, File)
by:
Posted: Oct 22, 2019 / 12:46 PM EST / Updated: Oct 22, 2019 / 12:46 PM EST

NEW YORK (AP) — Verizon is offering new and current customers a free year of Disney+ as the battle for streaming customers heats up.

The offer extends to certain new and existing unlimited 4G and 5G customers as well as the vast majority of new home-internet customers.

The promotion beginning Nov. 12 will provide access to Disney, Pixar, Marvel, Star Wars, National Geographic and other content. Disney+ plans to release more than 25 original series and 10 original films and documentaries in its first year, including a remake of “Lady and the Tramp.”

Shares in Netflix, which has dominated the streaming entertainment world for years, slumped almost 3%.

Netflix is trying to hold onto its vast customer base as cheaper alternatives from the likes of Apple, Disney and others go live next month.

Netflix has long had a similar deal with T-Mobile. Comcast says its upcoming Peacock service will be free for cable customers. And AT&T, which will launch HBO Max next year, today throws in HBO free for wireless customers on unlimited plans.

Apple is charging only $5 per month for its service, while Disney is selling a service featuring its vast library of films and TV shows for $7 per month. Netflix’s most popular U.S. plan costs $13 per month.