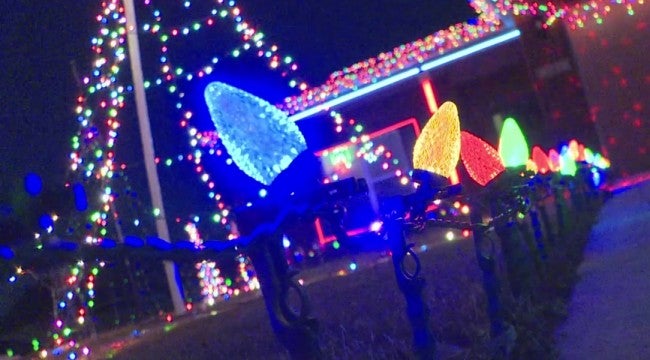 FRANKLIN, Ind. (WISH) — An Army veteran battling PTSD is using his fight to make the holiday brighter for others.

He’s spent hundreds of hours designing his very own light show synchronized to Christmas favorites, and now he wants to invite the community to see it. He’s got everything from the Trans-Siberian Orchestra to “Frozen.”

You don’t even have to get out of your car because he’s got his own radio station to tune into.

When the sun goes down, the lights and the music go up at Don Miclette’s home.

It’s been a labor of love as he has spent hours upon hours working on it since late September.

But there’s a deeper purpose, too.

Miclette is a Gulf War Veteran who brought PTSD, anxiety and depression home with him.

“You just got these memories stuck in your head that you can’t get rid of,” he said.

Even now, the sound of helicopters and construction noises like nail guns can bring Miclette to a bad place.

So he’s always looking for projects, the more time-consuming the better, anything to keep himself busy.

His message to other veterans is to find their own therapeutic activity.

“Know there’s light at the end of the tunnel somewhere,” Miclette said. “If it happens to be Christmas lights, so be it.”

Each song takes between 30 to 40 hours of work on the computer software he purchased, taking the music and beats and bringing them to life with lights.

His wife, Darla, is keeping his vision in check.

“If I had exactly what I wanted to spend on it, she wouldn’t like me anymore,” Miclette said with a laugh.

It’s not everyone that has a big sign in the front yard with a personal radio station, with strangers stopping by for a few minutes here and there.

But there’s been no negative feedback from his neighbors, at least not yet.

“They haven’t knocked on the door and complained about it, so I guess they’re okay with it,” Miclette said.

So after dark, swing on by the Heritage at Brookhaven subdivision on the north side of Franklin in Johnson County.

You don’t have to stay for the full 50-minute show, but just a few minutes will be worth it both for you and the man behind the magic.

“If I can make one child or one adult’s day, to make them happy, I know I’ve completed my job,” Miclette said.

It is located at 943 Redwood Drive, on the corner of Redwood and Blackthorn. From Hurricane Road, turn onto Brookshire Drive. When you come to the roundabout, turn onto Cedarmill Drive and as the road curves, it turns into Redwood Drive.

It’s very close to the Legends Golf Club, about 20 minutes from the heart of downtown Indianapolis.

Miclette believes this is just the beginning. He’s already got plans to build yard decorations throughout next year, which is why he says if you have any old lights you’re looking to get rid of, he’d be happy to take them off your hands.