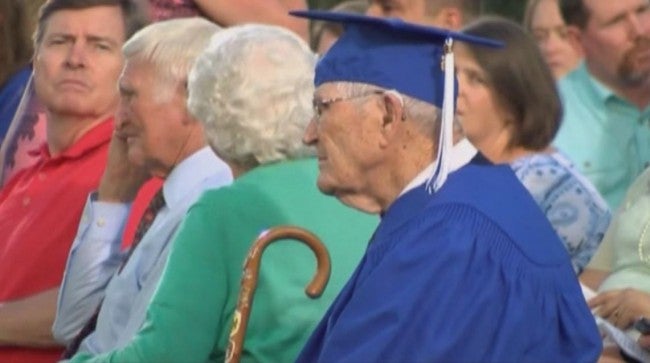 “I’m just appreciative of the Lord Jesus for letting me live to be 93,” the new Highland Home graduate said.

Among the sea of gowns and tassels, his diploma has been a long time coming.

“It’s a wonderful thing to come up here and be with the people and to receive a diploma for high school education,” Sexton said.

He saw combat in the Battle of the Bulge and was involved in the liberation of thousands of Holocaust victims.

Although he received his GED in the 70s, it’s been a lifelong dream to receive a high school diploma from his Alma mater.

“It sends a huge message to our young people today, for them to value that high school diploma, to value what it means,” Sherry Sport, supervisor of Crenshaw Co. Board of Education, said.

Sexton’s wife arranged for him to receive the diploma. It was made possible by a state law passed in 2014, granting high school diplomas to World War II, Korean War and Vietnam War veterans who qualify.

Many of them left school before graduation, to serve in the military.