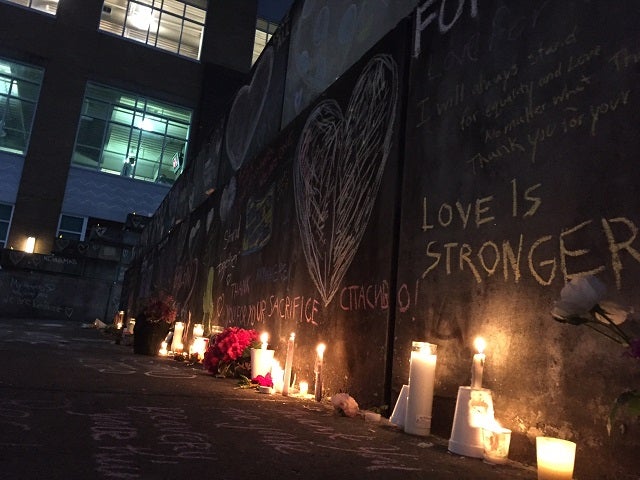 PORTLAND, Ore. (KOIN) – Two men were killed and another was injured while reportedly defending Muslim women against a man on an anti-Muslim rant on the MAX on May 26.

In a press conference Saturday, Mayor Ted Wheeler said the victims were heroes. Witnesses said the men intervened when the suspect, Jeremy Christian, was harassing a young Muslim woman in a hijab and her friend.

“They were attacked because they did the right thing,” Wheeler said. “Their actions were brave and selfless and should serve as an example and inspiration to us all. They are heroes.”

Governor Kate Brown spoke as well, saying “What happened yesterday was a crime of hate and it is absolutely unacceptable in our Oregon.”

Hundreds of people gathered near the Hollywood Transit Station on Saturday evening to honor the victims. Among them was Senator Jeff Merkley who said it was healing for the soul to see people coming to together.

“Maybe everybody could reach out and grab someone’s hand close to you,” he said.

Ricky Best, a 53-year-old army veteran and City of Portland employee died at the scene. Best lived in Happy Valley and had three teenage sons and a 12-year-old daughter according to David Austin, a spokesperson for City Commissioner Chloe Eudaly.

Best worked for the Bureau of Development Services as a technician and ran for a position on the Clackamas County Commission in 2014 after retiring from the U.S. Army in 2012. He served in Iraq and Afghanistan in his 23 years of service.

Eudaly released this statement about Best:

My heart goes out to the family of Rick Best. They have lost a husband and a father, and we have lost a treasured employee.

Rick worked for the city for a little more than two years and was a valued member of our Bureau of Development Services team.

And as a veteran, he served our country with honor and distinction. He stood up for two young women and others he didn’t even know – all because he wanted to help.

Losing a colleague is hard. Losing someone under these circumstances makes it even worse. We are very saddened at the loss of Rick and we will remember him fondly as we move forward.

I have asked our Human Resources bureau to make sure we have EAP counselors available to BDS staff when we return to work on Tuesday.”

The other man killed was 23-year-old Taliesin Myrddin Namkai Meche. His mother, Asha Deliverance on Facebook wrote “Taliesin Myrddin Namkai Meche, My dear baby boy passed on yesterday while protecting two young Muslim girls from a racist man on the train in Portland. He was a hero and will remain a hero on the other side of the veil. Shining bright star I love you forever.”

Deliverance spoke at the vigil Saturday, saying her son had a heart “as big as the world.”

His father and sister were also at the vigil, but his father said “words are coming pretty hard today.”

His sister said he loved to climb trees when he was younger and set his sights high. He worked at an environmental consulting agency, had a girlfriend and wanted to start a family.

A woman who witnessed the attack told KOIN 6 News she tried to stop Meche’s bleeding.

“I took off my shirt and put it on him,” Rachel May said. “I told him ‘You’re a beautiful man, I’m so sorry the world is so cruel.'”

Meche graduated from Reed College in 2016 with a degree in economics. In a statement shared on the Reed College Facebook page, President John R. Kroger said:

Taliesin majored in Economics at Reed. We have heard from many community members this morning who are sharing their grief and memories of this beloved young man.

Professor Kambiz GhaneaBassiri described Taliesin as an extraordinary person. “I still remember where he sat in conference and the types of probing, intelligent questions I could anticipate him asking. He was thoughtful, humble, smart, inquisitive, and compassionate. He was a wonderful human being. As good as they come. And now he is a hero to me.”

Noelwah R. Netusil, Professor of Economics, was Taliesin’s thesis advisor, and describes Taliesin as “a very caring person, smart, hardworking, and with such a bright future.”

As we mourn together and seek ways to honor Taliesin’s life, we will provide information about any memorials as it becomes available. Our deepest sympathies go out to Taliesin’s family and friends, the other brave victims, and their friends and family.

The third stabbing victim is 21-year-old Micah David-Cole Fletcher, of SE Portland. His injuries are not believed to be life-threatening.

Harris Zafar with the Ahmadiyya Muslim Community in Portland said while the events Friday were shocking, he was inspired by the actions of these men.

“….knowing that innocent people who were complete strangers stood up to defend these terrified two teenage girls,” Zafar said. “They had nothing to gain out of it but they stood up to help them and to do what was right. That level of honor and valor and courage, we don’t see.”

The mother of one of the girls the victims were defending posted on Facebook thanking them for what they did.

Hudson’s teenage daughter was with her Muslim friend when the suspect allegedly started yelling at them.

Community members have raised more than $100,000 on a GoFundMe page to benefit the victims.