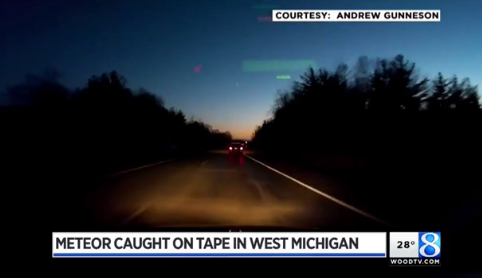 GRAND RAPIDS, Mich. (WOOD) – It’s not something you expect to see on your drive home from work.

As Andrew Gunneson drove south on U.S. 131 from M-57 Monday night, his dash cam caught a quick flash in the night sky. It was a meteor falling on the horizon.

What fell is technically a fireball, based on how bright it is, but it’s not clear where exactly it fell or if it even reached the ground.

Fireballs form anytime space debris collides with the atmosphere. They often burn up after a few seconds, so it’s not easy to track the type of debris that fell.

Gunneson described the bright light as green in person. According to the American Meteor Society, green means the material flying through the air is made up of nickel.

The society tracks meteor sightings. They say several thousand meteors of fireball magnitude occur in the Earth’s atmosphere each day.

In 2016 alone, the American Meteor Society reports 3,703 events of fireballs visibly falling around the United States. Michigan accounts for 163 of those reported sightings.

That’s all based on reporting to their website, so the number could be much bigger if they fell during the daylight and couldn’t be seen or weren’t reported at all.

Monday’s meteor was also visible in parts of Indiana. If you think you’ve spotted a meteor, or saw the one falling Monday night, you can report it here.