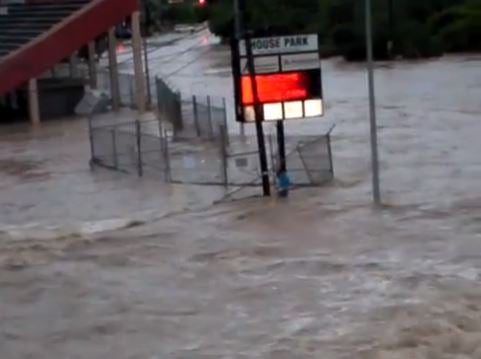 AUSTIN (KXAN) – Four days after a man was rescued at House Park from the Memorial Day flooding in Austin, we’re getting a look at the full video of the rescue.

You may remember the scene: a man holding onto a fence at House Park along Lamar Boulevard at 15th Street as water continues to rush him. The Austin Fire Department posted the entire video, where you can see the man jump into the rescue boat. He was taken to the nearby 15th Street ramp from Lamar Boulevard, where he was evaluated by medics.

House Park usually serves as the home for Austin Independent School District football and soccer teams, but during Monday’s floods when Shoal Creek rose above its banks and flooded Lamar Boulevard, it was better suited for a swim meet.

The waters rose up to as high as the second row of bleachers in the stands. The floodwaters were strong enough that some of the fencing around the stadium was torn down. In the aftermath, the field and surrounding parking lot were both caked in mud and with leaves and logs strewn about. But the most expensive part of the damage is the artificial turf. It was installed in 2008 to replace the natural grass surface – at a cost of about $60,000.

While it’s unclear if the turf is permanently ruined, there are fears it will have to be replaced. If that is the case, school officials are hopeful insurance will cover the cost.

If the turf is replaced, it could interfere with football season, however. AISD has 11 schools that play football, but only three stadiums for them to play in – including House Park, Nelson Field and Burger Stadium. If House Park is unavailable, that could create a scheduling nightmare.

Most immediately, the field being unusable most affects the Austin Aztex, who also call House Park home. The Aztex are in the middle of their season but are on a four-game road trip – with their next home game scheduled for June 20. They have already begun a search for a new stadium to call home for the rest of the season if House Park can’t be used.