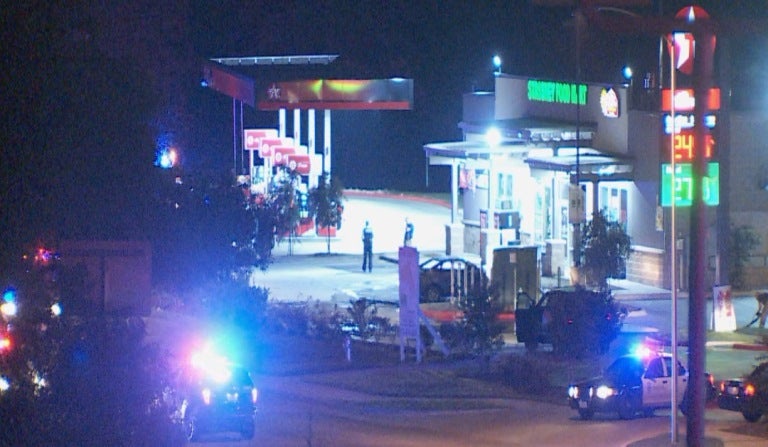 AUSTIN (KXAN) – Austin Police Department and Fire Arson investigators are looking into the cause of an explosion that sent three people, including two police officers, to area hospitals early Tuesday morning.

Fire officials say officers were trying to talk to a driver around 2 a.m. at the Stassney Food Mart on 5717 South Interstate 35. When officers tried to get closer to him, he jumped back in his car and said, “I think I’m going to set the car and fire,” according to APD dash camera video. A few seconds later, a loud pop is heard and fire engulfed the vehicle.

One of the officers said he saw the driver with a lighter in his hand and investigators believe the vehicle had fuel in it.

The officers were able to pull the driver – who was alone – out of the burning car before fire crews arrived, and the driver was taken to University Medical Center Brackenridge in serious condition and may likely have to be taken to Brooke Army Medical Center in San Antonio.

Police say they believe the driver of the vehicle was trying to commit suicide.

Meanwhile, one of the two officers involved went to South Austin Medical Center with minor injuries to his arm; he hit his elbow in the incident. The officer managed to drive his own cruiser to get checked out at the hospital and was treated and released. The other officer was treated at the scene and released.

“I’m very proud of the officers’ courageous life-saving efforts and relieved their injuries were minor,” said Austin Police Chief Art Acevedo. “My thoughts and prayers go out to the person they saved.”

A witness who called 911 said when the car exploded, it sounded like a bomb had gone off.

“Pretty intense few minutes when the car caught fire,” said AFD Division Chief Palmer Buck. “The building was undamaged. The car is a total loss, and we’ll know more after the investigation’s complete about all the circumstances that happened that led up to the car catching on fire and all the people being injured.”

As for the car, it was towed away from the explosion site around 4 a.m., and Stassney Lane is reopened.