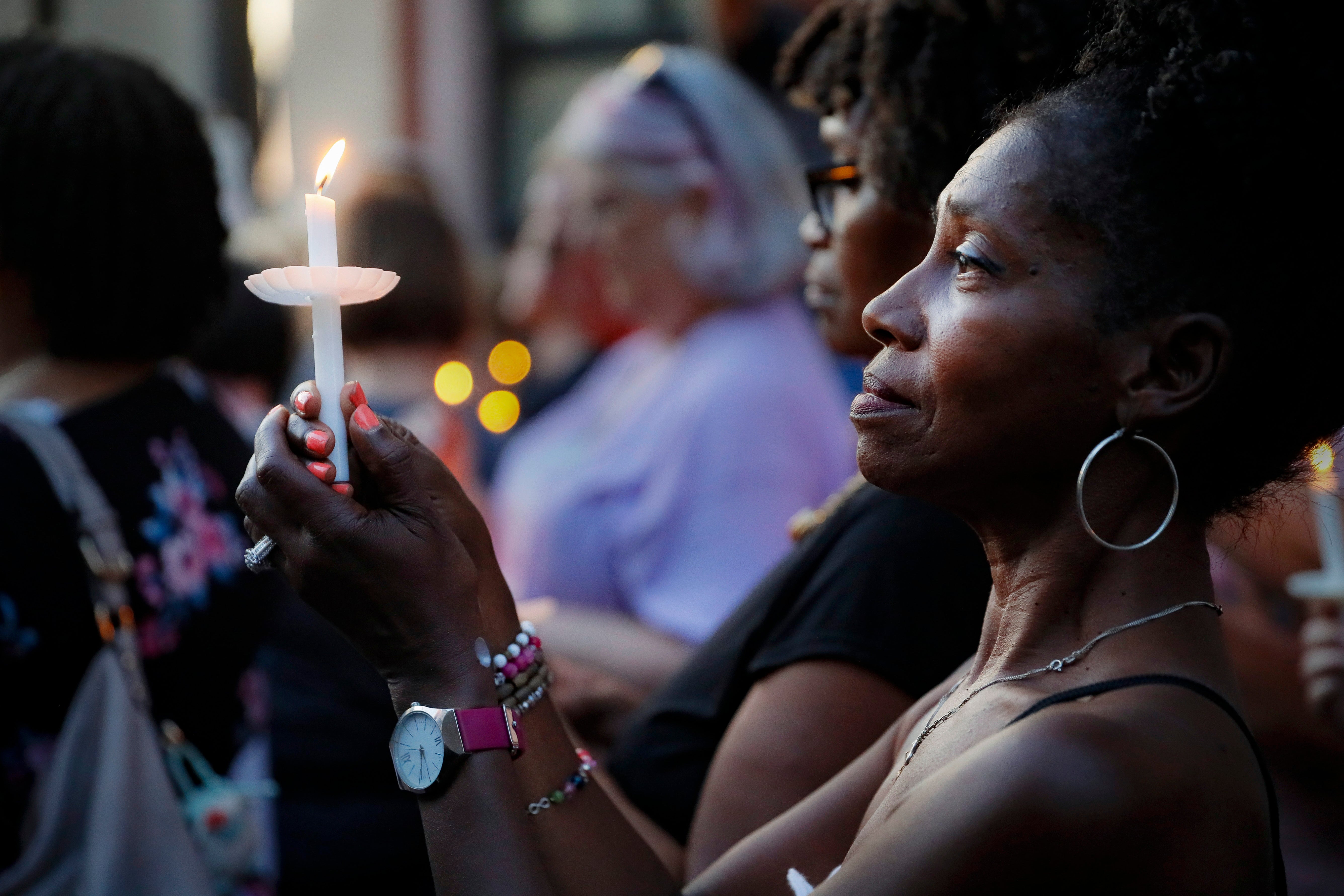 Mourners light candles as they participate in a vigil at the scene of a mass shooting, Sunday, Aug. 4, 2019, in Dayton, Ohio. A masked gunman in body armor opened fire early Sunday in the popular entertainment district in Dayton, killing several people, including his sister, and wounding dozens before he was quickly slain by police, officials said. (AP Photo/John Minchillo)
by:
Posted: Aug 5, 2019 / 12:17 AM EST / Updated: Aug 5, 2019 / 12:17 AM EST

DAYTON, Ohio (AP) — Nineteen hours after a masked gunman opened fire on revelers enjoying summer nightlife, the blood had been scrubbed from the sidewalk and the crime-scene tape torn down as a somber crowd of hundreds stood in the same street Sunday evening to honor the nine victims killed and 27 left injured in Dayton, Ohio.

They released doves, repeated the names of the dead and sang “Amazing Grace,” but directed an angrier chorus at Republican Gov. Mike DeWine, interrupting his speech at the vigil with chants of “Make a change” and “Do something!”

Mayor Nan Whaley, a Democrat, said there will be time later for dealing with the policy issues. She implored the crowd to honor the victims of the second U.S. mass shooting in less than 24 hours, for which no motive has been explained.

Connor Betts, 24, was armed with a .223-caliber rifle with magazines capable of holding at least 100 rounds of ammunition when he fired off dozens of shots in a popular entertainment district, Police Chief Richard Biehl said.

Betts was gunned down within 30 seconds of the start of his rampage, police said. Surveillance video they shared shows officers shot Betts at the doorstep of further destruction, just stopping him from entering a bar where some people took cover when the chaos broke out around 1 a.m. Sunday in the historic Oregon District.

Had he gotten inside Ned Peppers Bar, the result would have been “catastrophic,” Biehl said.

Bullet holes remained visible in the window there as people left flower bouquets in memorial in front of Ned Peppers and other bars. At one store, a few purple flowers were tucked into a bullet hole.

The gunman was white and six of the nine killed were black, police said. Although they’ll investigate the possibility of a hate crime, they said the quickness of the rampage made any discrimination in the shooting seem unlikely.

Officials said 27 more people were treated for gunshots or other injuries suffered while fleeing, and at least 15 of those have been released. Several more were in serious or critical condition, hospital officials said.

Nikita Papillon, 23, was across the street at Newcom’s Tavern when the shooting started. She said she saw a girl she had talked to earlier lying outside Ned Peppers, a bar she described as the kind of place “where you don’t have to worry about someone shooting up the place.”

“People my age, we don’t think something like this is going to happen,” Papillon said. “And when it happens, words can’t describe it.”

President Donald Trump was briefed on the shooting and praised law enforcement’s speedy response in a tweet Sunday. The FBI is assisting with the investigation as authorities put Betts’ life under the microscope in search of answers.

Two former high school classmates told The Associated Press that Betts repeatedly threatened other students and was suspended for compiling a “hit list” of those he wanted to kill and a “rape list” of girls he wanted to sexually assault.

Police have said there was nothing in his background to prevent him from buying the firearm he used.

The classmates, a man and a woman who are both now 24, spoke on condition of anonymity out of concern they might face harassment if their names were disclosed.

Bellbrook Police Chief Doug Doherty said he and his officers weren’t aware of any history of violence by Betts, including during high school, and had no previous contact with him.

Another former classmate, Brad Howard, said he knew Betts for two decades and described him as “a nice kid.”

Bellbrook-Sugarcreek Local Schools confirmed Betts graduated in 2013 but wouldn’t immediately release information about his records or answer questions about the classmates’ allegations.

More recently, Betts was taking college classes and working at an eatery. Sinclair Community College confirmed he attended there and studied psychology but wasn’t enrolled this summer. Chipotle confirmed he worked at one of its restaurants but released no other details.

Betts also was a familiar face at Romer’s Bar & Grill in Bellbrook, where he was known as an ever-friendly, happy guy who sometimes came in for a beer or two and never made trouble.

Bartender Andy Baker said Betts was at the bar last Monday and seemed fine. Baker said when he saw Betts identified as the shooter, he thought: There is no way that’s the guy.

Fellow customer Mike Kern said he sometimes played trivia at Romer’s with Betts, who was good for answers about current events and pop culture and was “the kind of kid you’d want as a son.”

“I never heard him talk about violence, say a racist word, or anything like that,” Kern said.

The Ohio shooting came hours after a young man opened fire in a crowded El Paso, Texas, shopping area, leaving 20 dead and more than two dozen injured. Just days before, on July 28, a 19-year-old shot and killed three people, including two children, at the Gilroy Garlic Festival in Northern California.

Sunday’s shooting in Dayton is the 22nd mass killing of 2019 in the U.S., according to the AP/USA Today/Northeastern University mass murder database that tracks homicides where four or more people were killed — not including the offender. The 20 mass killings in the U.S. in 2019 that preceded this weekend claimed 96 lives.

The shooting in Dayton comes after the area was heavily damaged when tornadoes swept through western Ohio in late May.

“Dayton has been through a lot already this year, and I continue to be amazed by the grit and resiliency of our community,” Whaley said.