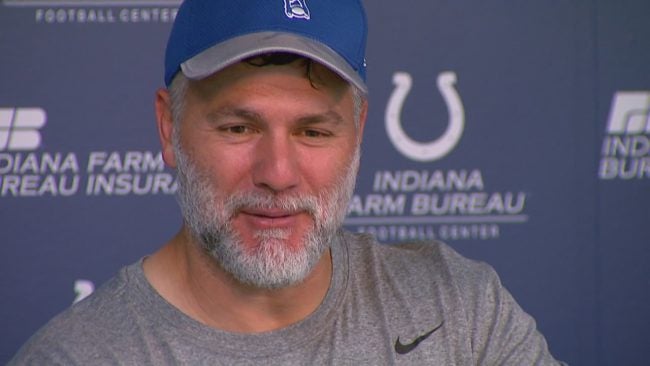 “You know, the college scouts that come to talk to you and say, ‘oh, we’re interested’ and all of that? I did not get drafted, I did not get invited to camp,” Vinatieri said.

It’s something that sounds crazy in hindsight, but Vinatieri got his shot in the NFL after signing as an undrafted free agent with the New England Patriots in 1996.

22 seasons later, Vinatieri is still going strong as the oldest player in the league. The four-time Super Bowl champion will go down as one of the greatest kickers in NFL history.

“Consistency is the key of this game,” Vinatieri said. “I think the guys that play a long time are the ones who can stay at a high level. You know, there (are) always rocky roads, but the ones that can (persevere) kind of stay consistent over a long haul.”

Not only has he embraced the responsibility of being a veteran in the locker room, but Vinatieri has also embraced the jokes that come with being a 44-year-old. Take his gray beard, for example.

“You know, it started out just kind of being lazy, then I kept going with it,” Vinatieri said. “So I think there’s a Just for Men endorsement out there, so help me out!”

And with jokester Pat McAfee gone, Vinatieri finds himself in a new role with the group.

All jokes aside, Vinatieri still suits up every Sunday because his passion for football still thrives.

“I still love the game as much as I ever have. It’s fun running out onto the field,” Vinatieri said. “I still think I can help our team win games, and why not keep going?”