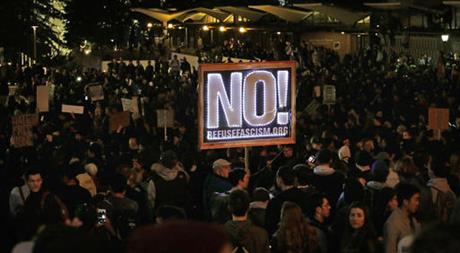 BERKELEY (KRON) – Breitbart News editor Milo Yiannopoulos is being met by violent protesters Wednesday as he was expected to speak Wednesday night at the University of California at Berkeley.

At 5 p.m., protesters started taking to the campus. Demonstrators were seen at around 6 p.m. breaking down the metal barriers.

KRON4’s Alecia Reid says the crowd was growing by the minute but started to subside after 7:30 p.m.. Small fires could be seen in the area of the protest.

The event has been canceled, as protests starting turning violent after 6 p.m.

Protesters were throwing fireworks and explosives at police, who were using tear gas.

Several injuries have been reported and at least four banks have been vandalized.

The event barricades were breached and used to smash the windows of the campus bookstore, where the entrance to the event was located. A large fire has been burning in front of the building. It briefly spread to a nearby tree.

The barricades directly in front of the bookstore were dismantled by protesters in masks. Many from the crowd have gathered on the bookstore’s steps.

After marching west on Durant Avenue, the group moved north on Shattuck Avenue, smashing windows and vandalizing a Mechanics Bank branch near the corner of Bancroft Way.

Chase and Wells Fargo branches were also vandalized. A Starbucks location near campus was vandalized and looted.

At 9:24 p.m., UC Berkeley police reported that protesters were heading back toward campus on Center Street.

By 10 p.m. the protesters returned to Telegraph Avenue and Bancroft Way, where they began to disperse on their own.

Over 1,000 people were protesting, according to KRON4’s Alecia Reid. Over 2,100 people responded to a Facebook post that they would be attending.

Berkeley police said that three or four injuries were reported as a result of fighting at Wednesday night’s protest, and they are investigating reports of a possible hit-and-run crash in which a driver may have struck a person with a vehicle.

They also received reports that banks were set on fire in the area of Center Street and Shattuck Avenue, according to police.

Yiannopoulos is a polarizing Breitbart News editor on the last stop of a tour aimed at defying what he calls an epidemic of political correctness on college campuses.

Tight security is planned at Berkeley, where several student groups have called for protests and pledged to shut down the evening event. Several of Yiannopoulous’ talks at other campuses have been canceled due to protests or security reasons.

The 32-year-old right-wing provocateur is a vocal supporter of President Donald Trump and a self-proclaimed internet troll whose comments have been criticized as racist, misogynist, anti-Muslim and white supremacist. He was banned from Twitter after leading a harassment campaign against “Ghostbusters” actress Leslie Jones.

Police have placed the campus on lockdown and asked residents to stay away from the area amid a tense protest.

A shelter-in-place order has been issued for the area due to the protest, which police described as a “dangerous situation.”

They announced a dispersal order on Twitter at 6:45 p.m., but as of 6:55 p.m. there were few officers on the plaza to enforce it.

Around 7:20 p.m. officers issued a 10-minute warning, threatening to use less-lethal weapons including chemical agents and batons if the crowd failed to disperse.

An attendee at the event was hit with a pole by protesters. He was hiding a Make America Great Again hat under his hood, according to a witness who asked to have his name withheld.

When the victim revealed the hat, he was knocked to the ground. Other protesters attempted to strike him while he was down, according to the witness. Police watching from a balcony above observed the situation and came down to help him out of the crowd.

After the attack, blood was seen on the ground in the plaza.

At least one pyrotechnic device was thrown at police by the demonstrators earlier Wednesday evening. It exploded near one of the officers, according to UC Berkeley student Russell Bierle.

UC Berkeley spokesman Dan Mogulof said Wednesday that the university Police Department called in officers from other UC campuses in the area, including Davis, and could ask for help from Oakland police and the Alameda County Sheriff’s Office if necessary.

He said that they have studied how the protests have escalated at other campuses and planned accordingly.

“The concerted effort was to really take a close look at lessons learned at other events,” Mogulof said.

Protests broke out just two weeks ago on the UC Davis campus when he was scheduled to speak. The rowdy protests actually prompted campus Republicans to cancel his appearance at the last minute.

The UC Berkeley visit is sponsored by the campus Republican club and is the last stop on Yiannopoulos’s cross-country tour that has sparked protests and sporadic violence.

Nearly 100 professors have joined students at Berkeley, calling for the event’s cancellation. But university officials say it will be allowed in the name of free speech.

Fans and foes agree that Yiannopoulos specializes in controversy. He is a self-proclaimed internet troll who has been criticized as racist, misogynist and white supremacist.

On Wednesday, the university sent a notice to all students that warned of crowds near the student union, where the 500-seat, sold-out event was scheduled.

“We anticipate there will be major protest/ demonstration activity leading up to and surrounding this event,” the letter from school officials said. It did not discourage protests but advised those who didn’t wish to participate to avoid the area.

Pieter Sittler, a spokesman for the Berkeley College Republicans, said the club doesn’t support everything Yiannopoulos says but “he gives a voice to repressed conservative thought on American college campuses.” He uses “levity and humor” that should not be taken literally, Sittler said.

Yiannopoulos’ talks have sparked protests, shouting matches and occasional violence at stops around the country. A man was shot and wounded at protests outside his Jan. 21 talk at the University of Washington.

Rowdy protests at UC Davis Jan. 13 prompted campus Republicans to cancel his appearance last minute. His last stop was supposed to be UCLA on Thursday but the invitation was rescinded, making Berkeley his grand finale.

UC Berkeley has issued the following statement on the protests:

Amid violence, destruction of property and out of concern for public safety, the University of California Police Department determined that it was necessary to remove Milo Yiannopoulos from the campus and to cancel tonight’s scheduled 8 p.m. performance.

The decision was made at about 6 p.m., two hours before the event, and officers read several dispersal announcements to the crowd of more than 1,500 protesters that had gathered outside of the Martin Luther King Jr. ASUC venue.

Of paramount importance this evening was the campus’s commitment to ensure the safety and security of those attending the event, the speaker, those who came to engage in lawful protest and members of the public and the Berkeley campus community.

Yiannopoulos was escorted away from the event immediately and has left the campus.

We condemn in the strongest possible terms the violence and unlawful behavior that was on display and deeply regret that those tactics will now overshadow the efforts to engage in legitimate and lawful protest against the performer’s presence and perspectives.

UC Berkeley and the UCPD went to extraordinary lengths to plan for this event and put the appropriate resources in place in order to maintain security. Officials were in contact with other campuses and paid close attention to lessons learned at the speaker’s prior events. Dozens of additional police officers were on duty. Multiple methods of crowd control were in place. Ultimately, and unfortunately, however, it was simply impossible to maintain order given the level of threat, disruption and violence.

We regret that the threats and unlawful actions of a few have interfered with the exercise of First Amendment rights on a campus that is proud of its history and legacy as home of the Free Speech Movement. As Chancellor Nicholas Dirks made clear in his message to the Berkeley campus community, while Yiannopoulos’ views, tactics and rhetoric are profoundly contrary to our own, we are bound by the Constitution, the law, our values and the campus’s Principles of Community to enable free expression across the full spectrum of opinion and perspective.

Yiannopoulos issued the following statement on Facebook about the protests:

Dirks called him a “troll” and “provocateur.” Critics have said that Yiannopoulos is misogynistic, anti-Islam and racist. Campus republicans called him “amusing and provocative” in the event invitation.

Yiannopoulos has been a journalist for right-wing news publication Breitbart under Steve Bannon, now an advisor to President Donald Trump. He has a book coming out later this year published by Simon & Schuster, a deal that was widely protested.

The Berkeley College Republicans also issued a statement on the night’s events.

“Their success is a defeat for civilized society and the free exchange of ideas on college campuses across America. We would like to thank UCPD and the university administration for doing all they could to ensure the safety of everyone involved.”

As a result of the protest, trains were not stopping at the downtown Berkeley station.

By 10:15 p.m. BART officials had re-opened the Downtown Berkeley station.