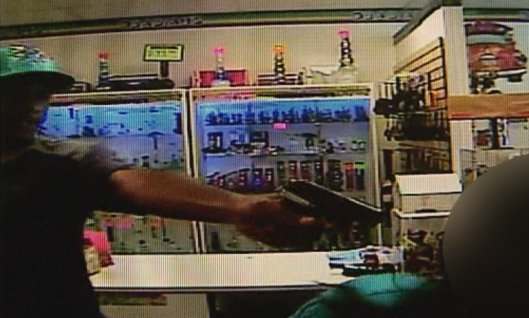 INDIANAPOLIS (WISH) – Police need your help identifying the man behind a violent robbery that left a store clerk beaten and shot. Police say it happened around 4 p.m. Saturday at Obadiah’s Smoke Shop near 38th Street and Georgetown Road.

Police say the worker was shot in the thigh and is now recovering in stable condition at IU Methodist Hospital.

A surveillance camera shows the suspect walking in past the counter.

Police said he pretended to buy something. When the clerk goes to the register, you can see her in the video turn around and get punched by the suspect four times. He also pulls a gun on her.

The woman runs off and the man grabs money from the open register. As she tries to escape through the front door, you see the suspect run toward her and fire his gun.

“He wasn’t going to stop at anything,” said Officer Rafael Diaz with the Indianapolis Metropolitan Police Department. “He has no regard for human life based on his actions that we see clearly in this video.”

Diaz said the woman fell by the door and that the suspect walked over her, then took off in a green, 4-door Pontiac Bonneville, possibly a late 90’s or early 2000’s model.

24-Hour News 8 tried talking to management at the shop Monday, but it was closed. However, there was a sign on the door saying it was supposed to be open on the holiday.

Some customers showed up Monday and were surprised to see the doors were locked, but they were not surprised after they saw the video of the robbery.

“It was wild, man,” said John Johnston. “Honestly, I can’t believe it happened at 4 in the daytime over here. I wouldn’t expect that to happen.”

“I can’t believe people have the nerve to do that at any time of the day,” another customer told 24-Hour News 8.

Police don’t know how much money was taken. A sign near the front door shows the store doesn’t carry cash.

Police are asking anyone who might be able to identify the suspect, or possibly saw the vehicle, to call Crime Stoppers at 317-262-TIPS(8477).