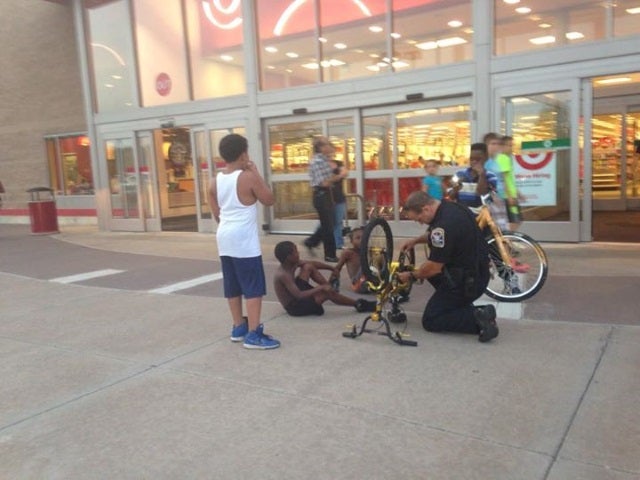 ANSONIA, Conn. (WTNH) – Ansonia police officer Michael Castillo doesn’t have a Facebook account, but a picture of him is all over the social media site for all the right reasons.

A few days ago he got a call about kids fighting outside a Target store. He went to check it out. There was no fight.

“I said, ‘hey, are you guys fighting?’ They said, ‘no we’re friends.’ Then I saw one of the bikes was broken, and the kid said, ‘my bike is broken, so I just got down and fixed it,” Officer Castillo said.

He grabbed his tools out of his cruiser and fixed the bike chain. He didn’t know that Faith Taylor saw what was happening and snapped a picture.

“I don’t know who this officer is, I just want somebody to give him kudos for this good thing that he did,” she said.

She put the picture on the Ansonia Police Department Facebook page. It’s been shared and liked hundreds of times, even making it back to Officer Castillo’s family in New York state.

“It feels great. It really does,” he said. “There is so much negativity in police work everywhere, just to get this one thing, it’s so small to me, I was just helping a kid out, but it’s big to everybody else. I think this shows a positive outlook on police work.”

A News 8 viewer sent in more pictures of Officer Castillo playing basketball with kids. They call him Officer Mike.

“If you can get in good with the kids, I think it’s the most important,” he said. “When I was a kid, I looked up to police officers, and I want that same thing.”

Officer Mike is making that impression on another generation of kids, one at a time.

“I did not expect anything to blow up like this. It feels great. It’s put a big smile on my face,” he said.

Officer Castillo doesn’t have any kids of his own yet. He’s getting married in September.