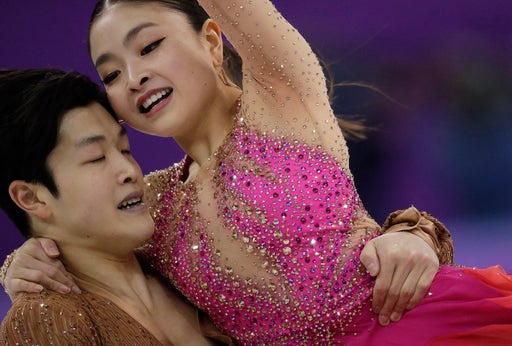 GANGNEUNG, South Korea (AP) Tessa Virtue and Scott Moir sat flanked by their training partners, Gabriella Papadakis and Guillaume Cizeron on one side, Madison Hubbell and Zachary Donohue on the other, both having just skated in the Olympics for the first time.

Yet it was Moir, who along with Virtue forms perhaps the greatest ice dance duo ever, who acknowledged his nerves nearly got the best of him before their short program at the Pyeongchang Games.

”People assume because we’ve been doing this so long that we can hold it together and that’s not the case,” Moir said. ”It’s not easy to get out there with all of the country watching at home.”

Well, they sure made it look easy.

Virtue and Moir floated across the ice in perfect harmony, every step of their samba and rhumba in perfect unison, to break their own record for a short program with 83.67 points. Their rock-inspired rift Monday left them more than a point ahead of Papadakis and Cizeron heading into the free dance.

”We put the pressure on ourselves,” Virtue said. ”It’s a big part of being tested competitors, and we push each other and we push the limits.”

Papadakis and Cizeron skated after the Canadians and were immediately thrown off by her costume, which came unhooked at the neck seconds into the music. They held things together through the wardrobe malfunction to score 81.93 points, and now will turn to their stronger free dance Tuesday.

”It was pretty distracting, kind of my worst nightmare happening at the Olympics,” Papadakis said. ”I told myself I don’t have a choice. I have to keep going and that’s what we did.”

U.S. champs Madison Hubbell and Zachary Donohue were third, two-hundredths of a point ahead of their compatriots, Maia and Alex Shibutani. The third American couple, Madison Chock and Evan Bates, was seventh and in medal contention despite an injury that she aggravated during warmups.

”This is a testament to how strong ice dancing is,” Hubbell said. ”We didn’t expect it to be any different. You have to be at your best to be close with this many great skaters.”

Maybe even the greatest.

Virtue and Moir won Olympic gold at the 2010 Vancouver Games, then won silver four years later in Sochi, Russia. They stepped away from competition for two years, the taxing grind of more than 15 years spent working together having taken its toll, but returned for another run. They are seeking an unprecedented fifth Olympic figure skating medal.

They were nearly unstoppable last season, winning the world championship as if they had never been away, but were upset by Papadakis and Cizeron at the Grand Prix Final in December.

They proved Monday that they’re still the team to beat.

Performing to Latin-infused music by the Rolling Stones, Eagles and Santana, Virtue and Moir were in lock-stop from the moment they stepped on the ice. They received level-four marks across the board, highlighted by their dazzling midline step sequence to open the program, and nailed their rhumba sequence on which they were harshly graded in helping Canada win the team event.

The crowd, relatively sparse compared to other figure skating sessions, roared as the three-time world champions skated off to await their scores. The fans roared again when their record numbers were read, and the longest-tenured ice dance team in Canadian history smiled and hugged.

”To go out and connect and perform like that,” Moir said, ”that’s why we came back.”

Papadakis and Cizeron also received mostly level-four marks, underscored by their in-step rhumba and synchronized twizzles. The only miscue came on their closing straight line lift, perhaps because they were distracted by her emerald and blue dress revealing a bit too much.

”I felt it right away and I prayed,” Papadakis said. ”That’s about what I could do.”

Hubbell and Donohue proved their win last month at nationals, after years of frustration, was no fluke with a dramatic performance dragged down only by a bobble on their synchronized twizzles. And the Shibutanis overcame a shaky start to finish with a breathtaking rotational lift.

Meanwhile, Chock and Bates had to push aside the uncertainty caused by her injury to put together a strong opening performance. Chock has a floating bone fragment in her right foot that she’s dealt with all season, and it caused some pain about 30 seconds before their warmup was complete.

She planned to see a doctor later Monday, but doesn’t expect to miss the free skate.

”I’ve skated all season with this and managed it,” Chock said. ”I injured it in the beginning of the season. It’ll be fine. The adrenaline kicked in today and that really helped.”