VP Pence: Attacks on communities of faith ‘all too frequent’ 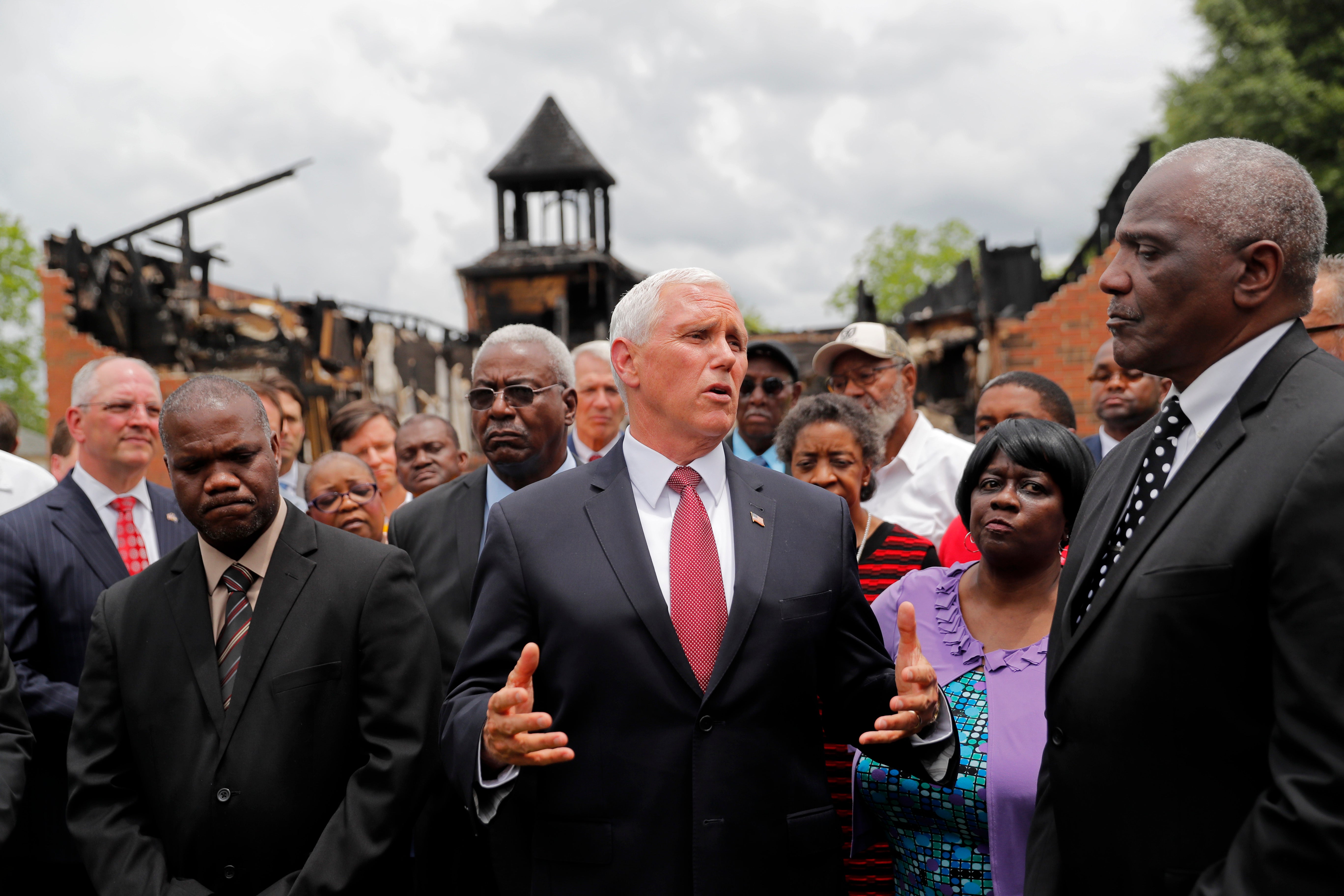 OPELOUSAS, La. (AP) — Vice President Mike Pence praised the parishioners of three African American churches Friday for the inspiring way they responded to the destruction of their sanctuaries by an arsonist and lamented that attacks on communities of faith have become “all too frequent.”

Pence and President Trump had been accused of not paying enough attention to the attacks on the churches, which authorities say were committed by the son of a local sheriff’s deputy. Holden Matthews has pleaded not guilty to arson and other charges.

Speaking in front of the Mt. Pleasant Baptist Church in Opelousas, one of the three churches burned in March and April, Pence alluded to recent attacks on synagogues in California and Pittsburgh and on a mosque in New Zealand.

“Sadly we live in a time when attacks on communities of faith have become all too frequent,” he said, surrounded by members of the churches, their pastors and Louisiana government officials.

“No one should ever fear for their safety in a house of worship, anywhere in this country, anywhere in the world. Attacks on communities of faith must stop,” he said as the parishioners around him said “amen.”

The first blaze to hit this area about 60 miles (97 kilometers) west of Louisiana’s capital city of Baton Rouge happened at the St. Mary Baptist Church on March 26 in Port Barre, just outside of Opelousas. Days later, the Greater Union Baptist Church and Mount Pleasant Baptist Church in Opelousas were burned. Each was more than 100 years old.

Pence said he came Friday to show the parishioners and their church leaders that the country was supporting them and had been inspired by the way they met the destruction of their houses of worship with courage and resilience, pointing out the forgiveness offered to the man accused of setting the blazes.

“What happened here at Mt. Pleasant, at Greater Union, at St. Mary’s was evil but these communities of faith have overcome evil with good,” he said.

Rev. Pastor Kyle Sylvester of St. Mary Baptist Church thanked Pence for coming and remarked on the outpouring of support for the churches and their congregations.

“It just proves that we live in a world where people still care about each other,” he said. “We have to make sure that we don’t lose heart … and remember that we’re here to help one another.”

In the wake of the fire that engulfed France’s historic Notre Dame cathedral, an internet crowd-funding campaign intended to ensure the black churches were not forgotten has raised more than $2 million for their rebuilding. Pence said the sound of hammers would soon be heard at all three churches as reconstruction gets underway.

Some who gathered Friday dismissed criticism of Pence and Trump and said they were glad the vice president came.

“Harboring resentment, passing judgment, that’s not the character of a Christian,” said Sheryl Richard, a member of the Greater Union Baptist Church. “We stand here thankful that they thought of us at all and that’s what matters.”

From Louisiana, Pence traveled to Kentucky, where he visited a small company, Hallway Feeds in Lexington, to talk trade and was expected to attend the Kentucky Governor’s Ball.